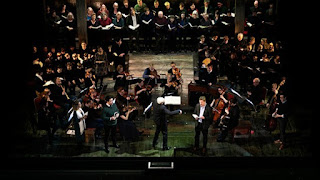 The English Touring Opera were about to launch themselves into a UK tour of Bach's St. John Passion just before the government announced the lockdown, and so sadly the tour had to be cancelled. They did however, manage one concert, on the 5th March, at The Hackney Empire in London. Fortunately, this concert was recorded, since it was to be sent out in advance of the tour to all the community choirs taking part as chorus, and so, as a second best, instead of the live version, we were able to watch and listen to this recoding of the work. The link, on the ETO''s Youtube page will be available for the next week.

Intercut with the recording of the concert, this video shows choir members from all the varied choirs up and down the country in their own homes singing along with the choruses and also has a little footage of the rehearsal too. That being said, the performance is seamless and these do not detract, but instead serve to highlight and give new poignancy to the already emotive text.

In this performance, the community singers were The Hackney Singers, The Hackney Chorale, The London Youth Boys' Choir, and The Collegium Musicum of London Chamber Choir. The whole was directed by James Conway with 7 ETO soloists and The Old Street Band all under the conducting of Jonathan Peter Kenny.

Bach wrote this oratorio in 1723 /4 and it was first performed in April of 1724. Intended to be sung in two large parts sandwiching the sermon in a church service. It would have been a very long service then since the work is 110 minutes' long! However, with today being Easter Sunday, and the world being in the sorry state it is in at the moment, spending 2 hours of my time listening to this seemed quite appropriate.

The soloists [Susanna Hurrell, Martha Jones, Tim Morgan, Richard Dowling, Thomas Elvin, Stephen Loges, and Bradley Travis] were all in fine voice and their enunication of the texts (both German and English) were clear and understandable. The choruses were in English, whilst the arias and recitativo parts were all in German with subtitles.

I enjoyed very much the use of original instruments for this oratorio too. The Old Street Band were playing, as near as possible, the original scoring of the work with as few modern day instruments as possible. The ensemble included period oboes, viola da gamba, and the wonderfully cumbersome theorbo lute. Obviously on a video recording of a live concert the sound quality is very hard to judge, but by and large it was excellent, and the balance between sections superbly directed. It's not an easy piece of music by anyone's standard, and, as with much of Bach, it can become very 'samey' if not too careful. Here each thought process was clearly marked and the dynamics given superb attention to detail, by all.. musicians, chorusa and soloists. There was even one chorus placed high above the audience and away from the main stage which would undoubtedly have added some lovely polyphony live.. but sadly not on the computer screen!

Of Bach's two surving Passions this is the older and shorter, and perhaps the better known too. What a lovely idea of ETO to premiere it on Easter Sunday. Immaculately sung; precise, clear, and sung with 'passion' (if you'll forgive the obvious pun!).