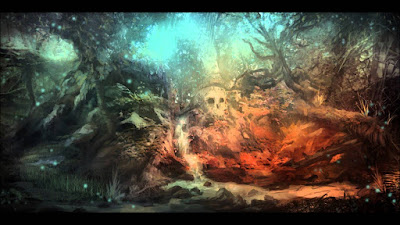 I sat down this afternoon determined to listen to a concert of lesser known and hardly performed pieces of Beethoven performed by the London Philharmonic Orchestra but got completely sidetracked when this gem of a piece came onto my newsfeed.

The composer, Mieczyslaw Karlowicz was completely new to me, and judging from the picture accompanying the title (above), assumed quite incorrectly that the composer was contemporary and that the music would be in the modern progressive style. I was completely wrong. Karlowicz was a Belarus-born Polish composer (1876 - 1909), and a contemporary of oh so many greats such as Bizet, Brahsms, Dvorak, Grieg, Mahler, Sibelius and Tchaikovsky to mention just a small handful.  He is therefore in august company and perhaps because of this has become somewhat neglected or forgotten. That's a real shame, this work, his only symphony, is a work of genius.

Composed in the classical 4 movements, and written in the Late Romantic style (composed in 1902), the work feels a lot fresher and more alive than some of his contempories' perhaps because it is unknown. There is definitely a thematic / programmatic feel to the compostion, as if the re were a story being told through the music, one of magical kingdoms, mythical creatures, battles, love trysts, romances, etc... and to emphasise this idea Karlowicz also gave this symphony a title, "Rebirth". Perhaps a Polish legend of a hero being brought back to life through love, or some such idea. I have also just finished listened to a recording of Wagner's Das Rheingold, and whether this is just coincidental or not, I couldn't help finding thematic and phrasal comparisons between the Wagner and this symphony.

Played on this recording - available on Youtube - by the National Polish Radio Symphony Orchestra conducted by Lukasz Borowicz, it was an absolute joy and surprise, and I have now found a new composer to research and listen to. I'd love to be able to listen to this piece live one day. If you are a fan of the classical music of the Romantic era, as I am, then you need to listen to this symphony.