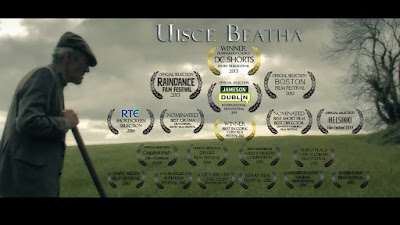 Yet another absolute gem of a short film found on Youtube. This one, with the perhaps seemingly rather strange or foreign title of Uisce Beatha, is beautifully crafted and one can easily understand how it has garnered so many coverted awards. The title is Irish (Gaelic) and translates as "The Water Of Life" or more commonly, "Whiskey".

The film is only 8 minutes' long but tells a wonderfully human and empathetic story without much dialogue. The variation of style of shots from non-conventional close-ups to vast scenic pans does not distract but in fact aids our viewing, as indeed the accompanying Irish music used throughout.

The year is 1912, and we are in rural Southern Ireland. A young man, Tom (Tadhg Hickey) is saying goodbye to his elderly farmer father as he is travelling to Queenstown to board the Titanic and set sail for America. On arriving in Queenstown and finding board and lodgings for the night, makes merry with the locals, singing and dancing and boasting of his luck in a 3rd class passenger ticket. However, fate takes a rather fortunate twist for him as when he wakes up from his hangover in a field outside the town, he realises he has missed the ship and is devestated, annoyed at his own stupidity at getting drunk and allowing himself to miss the boarding. He has no other recourse than to make his way back to his father and the farm.

Filmed on location in County Cork, and based on a real life event, it was researched, written, cast, shot and edited in just one month with a total budget of just 300 Euros. The screenplay was written by Tadgh Hickey who also played the lead character of Tom, with other characters played by Jack Healy, Martin Purcell and David Cooney. The film was produced by Aideen Wylde and directed by Shaun O'Connor.

Certainly one of the more proficient, mature and superbly crafted shorts I have ever watched.