Talk; or What Can Happen In A Corporate Coffee Shop On A Tuesday Afternoon - The Eagle Inn, Salford 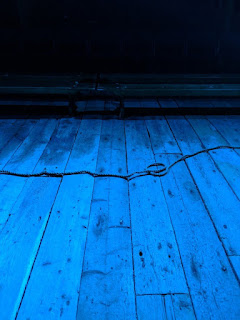 If there is anything happening on the avant-garde theatre scene in Manchester, then you can be pretty sure that Mark Reid is somehow involved. This time, with a company calling themselves, rather ironically but perhaps also correctly, Not Even Theatre, Reid has teamed up with actor Tom Durrant to present this 'event'.

If I am honest, then as a genre it is pretty difficult to pigeon-hole. Still very much in the development stages of this idea, and something which will undoubtedly have a varying degree of success depending very much from audience to audience it is certainly an idea which can be explored further.

What was presented this evening was an alarm clock timed 35 minute show which started with Reid and Durrant (and audience as well if they were quick enough to catch on!) writing suggestions of 'games' from a given TALK MENU (on our seats upon entering), on a piece of paper screwing it up and having a paper-ball fight before placing them all in a bucket

They then took it in turns to pick a piece of paper and whatever suggestion was written on there, they would 'perform'. The menu listed 16 items, however, it would be I imagine, almost nigh impossible to have had all 16 in the time allowed, and so of course every performance of this show will be different dependant on what is picked from the bucket.

If the same item is picked, it is done again. And this happened with both a long jump game which involved Reid and Durrant seeing who could do a standing jump the furthest along the length of the auditorium. and the curiously titled menu item, 'Are You Old Enough For This', which played the classic Rainbow children's TV show on a screen behind them - you know the episode... the infamous one with all the double-entendres and sexual references (apparently banned)... and they did the voices.

Others from the menu included '7200 seconds' which they took turns to tell us what they would do if they only had two hours to live; 'Infinity', a similar game where they took turns to say what they would do if they were able to live forever; 'Get It Quick', which involved them both trying to copy the gyrations of Mr. Motivator (played on the screen), and a bizarre plate-bashing game smashing the plates in time to a Youtube video of an American doing just that... !!

It was quite bizarre, but strangely compelling. A suggestion for further development would certainly be to make sure the first two papers taken from the bucket were Tom's Recital and Mark's Recital, and then the audience are all up to speed and on the same level. It might also be interesting to involve the audience a little more in the games too... ask them what they would do with only 2 hours to live etc....or even split them in two and have two teams?? - again this all depends on the agreeableness and willingness of each audience.

An interesting idea which is begging to be taken further.