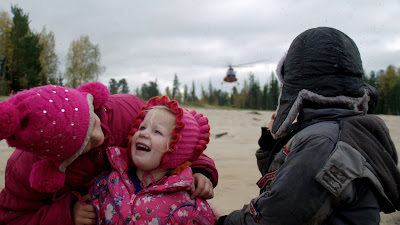 French film documentarian Clement Cogitore who made his name with 'Neither Heaven Nor Earth' has missed the boat completely with this strange, uncompelling and boring 50 minute documentary about two feuding families living a hermit-like existence miles away from civilisation in the Krasnoselkupsky Forests in Yamalo-Nenets Okrug, Siberia.

The two families (with a whole host of young children - at least 16 counted!) live opposite each other on either bank of a small river whilst their children see fit to play on the small sandy island in the middle 'No Mans' Land'.  We see the Braguino family and their quotidianal routines which include hunting, skinning and cooking ducks (even the smallest children are involved in all stages), and we see them stalk and kill a bear. The insensitive and unnecessary showing of the skinning and cutting open of the bear, as well and seeing its severed membranes was gratuitous and gory. We also see a little of the other family - a family that is shrouded in mystery and illegality. If we are to believe the Braguinos then their neighbours - the Kilines - are getting up to all sorts of illicit dealings such as poaching, spying, and perhaps even more. The looks of fear and distrust on their faces is enough to know their concerns are genuine.

Towards the end of the film a helicopter flies in with para-military uniformed men, with arms and supplies for the Kilines, and the film leaves us very much to make up our own minds on how this concludes. No resolution is forthcoming from the film-makers.

The style of the documentary is also a little disappointing. We have to believe that what we are witnessing is real, although it does seem a little like a mock-up at times, and some things are most certainly done for the benefit of the camera. Visually disappointing too, as we see very little of the area where they live - an area of supposed pristine forest and where no other humans have set foot for hundreds of miles around. Instead we see many close-ups of faces and the focus of the filming seems to play very much on the children rather than the adults. We are unclear how the feud started, how it is provoked, and even the veracity of the Braguino's claims.

There is a sense that the film is deliberately withholding such information, and making the film have a somewhat enigmatic or ethereal quality which simply hinders the documentary nature of the narrative and rather than making it interesting, serves to weaken the pulse and make me, and others, leave the film feeling somewhat confused and unfulfilled.