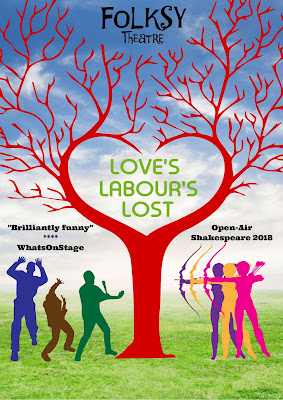 It all sounded so idyllic, an August bank holiday summer evening sat in the gardens of the beautiful Ordsall Hall in Salford watching Love’s Labour’s Lost – the Shakespeare comedy being the latest production from Folksy Theatre.  However, this is the UK and after the constant rainfall throughout the day, there was a very understandable decision made to move the performance indoors.  Whilst it was a little disappointing, the setting of the Great Hall in Ordall Hall was very impressive.
This was my first experience of Folksy Theatre, who have been touring the UK since 2008 putting on mainly open air performances.  The cast for this production consisted of six members, all whom played multiple parts.
We very quickly got to meet the entire cast as they started to interact with the audience, toasting the King and wishing us good health with their tankards and goblets.  This was a fantastic way to break down the barriers and made us all feel like we were personally involved in the performance and not just there as observers.
Love’s Labour’s Lost is one of Shakespeare’s earliest comedies, thought to have been written in the mid-1590s.  It follows King Ferdinand (Andrew Oakes) and his companions Lord Longaville (Andrew Armfield) and Lord Berowne (Alex Bird) who swear off food, sleep and women for 3 years – in order to become scholars.  Needless to say this all goes wrong as they meet the Princess of France (Em Watkins), Lady Rosaline (Isobel Whitcomb) and Lady Maria (Holly Durkin) – each falling in love without confessing to the others that they have broken the agreement.
There is a subplot of Costard (Holly Durkin) and Jacquenetta (Alex Bird) who have secretly been romantically involved, and are about to be sentenced by the King.  It is here that we get to meet Don Adriano de Armado in the first of his many hilarious appearances in the play – brilliantly portrayed by Andrew Armfield as he struts around the room bellowing his lines in his outrageous accent.
On discovering that the Lords have broken the vow, the King chastises them but Berowne quickly reveals that the King has also fallen for the Princess.  It is at this point that they decide to relinquish their 3 year vow in pursuit of true love but this path is far from smooth.
Many of the scenes are suitably chaotic and playful, as you would expect from a Shakespeare comedy, including the King and his Lords dressing as Russian Muscovites dancing for the Princess and her Ladies which was hysterical.
It can often be a difficult balance of modernising Shakespeare but still being true to the original script, but Folksy Theatre have done an amazing job in this production.  They use modern dress and modern ad-libs but they remain wholly true to the script throughout the performance.  I will definitely be checking out future Folksy Theatre productions and if you haven’t then I would urge you to do the same – a thoroughly entertaining evening that may have been even better had the weather been kind to us.
Reviewer – John Fish
on – 26/8/18