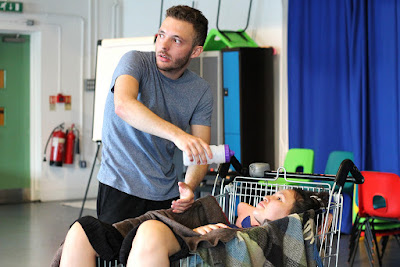 Not content with using their home base at Manchester's Royal Exchange Theatre, the Young Company have gone 'on location' to bring you a promenade production of a very youthful and zestful version of Shakespeare's Tempest.

Attention, I am now going to have a moan! Not just at this version, but at most modern productions of Shakespeare. I get extremely angry and irritated that producers and directors all over seem to think that Shakespeare's texts are anybodies to bastardise, rewrite, update, and arrange at will, without so much as a by your leave! No other author, dead or living, is subjected to this mistreatment of his writings; nor would any author or authors' representative permit such changes! So why is Shakespeare always treated so?! I have absolutely no objection to anyone anywhere changing Shakespeare - in this instance it happened to be The Tempest - but PLEASE, don't call it the same name as the Bard's original work... call it something completely different with a subheading reading something along the lines of:  'Based on the work of William Shakespeare'!! It is enough that purists have to suffer almost every Shakespeare production in modern dress and transported into outer-space or some such nonsense without having the text rewritten too! - Ok, rant over! Apologies.

So, back to The Royal Exchange Young Company and their version at Abraham Moss School. This was vibrant, modern, relevant, easy to follow, and darkly humorous. Using several locations throughout the school, including the main theatre space, the canteen, the atrium, the quad and various corridors, it was excellently thought out and directed by Nickie Miles-Wildin, although some areas did work better than others, and one of the tiny corridor areas when we were asked to squat down was particularly uncomfortable.

Continuing with The Royal Exchange's policy of inclusiveness and gender-blindness when casting, the roles of Prospero, Caliban, Antonio and Adrian were given to actresses. All the roles though were excellently cast, and each performer gave their all to this show making it exciting and vivid. A promenade production needs to keep the audience continually engaged and a part of the action, and this was achieved this afternoon with the use of several 'devices'. Printed and hand-written notes all over the walls, excellent and eerie sound effects, the omnipresence of 'spirits' observing us from behind office windows, or 'controlling' and ;monitoring' us with their 'technological instruments'. We were never left unattended or apart from the action for even one second, and this was a major accolade to all involved.

The sincerity of the actors in the lead roles meant that those playing 'spirits' could be a little more sardonic, and that is exactly what happened. Their malevolent omnipresence and their conspiratorial mischief-making was a wonderful touch, as was the idea of having several Ariels. The movement and use of space throughout was innovative and interesting, and with the running time of 85 minutes without interval, it was just about right in length too.