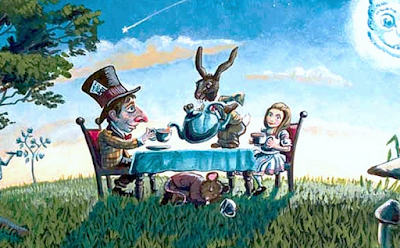 I was delighted to be going to see Alice’s Adventure in Wonderland at Dunham Massey - an adaptation of Lewis Carroll’s famous story.  A long time favourite of mine I was interested to see how Chapterhouse Theatre company would bring the famous tale to life. The company formed in 1999 perform in over 150 open air settings through out the UK and Ireland.

Dunham Massey Hall park was a perfect setting for the outdoor production. Upon arriving it was not very well signposted which way to go for the performance but following the crowds of people carrying picnic hampers and camping chairs did the trick. We found a spot and settled down on our chairs with our picnic amongst many excited families. We had good vision of the stage and set despite being quite far from the front.

The set was suffient and set the scene intially for Alice and her sister with a big tree to stage left. Through out the production the set changed with little touches such as the Mad Hatter's tea party and the rose bushes in the queens garden. When Alice gets smaller this was conveyed by the doors on the set growing larger which was a good way of portraying her shrinking. When the white rabbit appeared for the first time he mentioned going down the rabbit hole and then to the audience's delight jumped down it, soon followed by Alice. We could not see the hole so it was unexpected when he literally jumped near the edge of the stage and disappeared.

Overall the costumes were pretty good. In Victorian style it was easy to tell who was who. Except perhaps the Caterpillar... he was on his mushroom but for younger audience members it was not apparent what he was. This was further confirmed by two young girls behind asking what was going on and who he was. In particular I thought the Cheshire cat costume was delightful especially for the younger ones. I was surprised when the actors had no way of amplifying their voices when the appeared on stage but credit where credit is due, voice projection was excellent through out. I thought all the actors played the characters well. The Mad Hatter was my favourite character purely because of his animated faces, he raised some giggles from the audience.

Towards the end of the first half when Alice meets the Mad Hatter and they are talking about the tea party audience participation was encouraged. They asked us all to stand up and learn a little song and dance. The children were delighted with this and adults happily participated too. Aside from this there was little audience interaction throughout the performance. Given the response from the audience when asked to participate I think a little more would have gone down a treat and kept the younger viewers even more interested.

After the 20 minute interval I felt some children found it hard to resettle and maybe 20 minutes was a little long for a family show. I didn’t find the second half quite as captivating as the first although the game of croquet was quite entertaining with flamingo puppets used to hit the ball. It would seem several children also lost interest in the second half as many went off cartwheeling and climbing trees.

Overall I enjoyed watching the production and would recommend it to families, in particular with children aged five years and above. I would advise arriving early to get a good spot by the stage where children's attention will be held best. In conclusion I had a nice evening out watching a favourite story of mine in a beautiful rural Greater Manchester countryside setting by a clearly talented theatre company.