REVIEW: What The Ladybird Heard - The Lowry Theatre, Salforrd 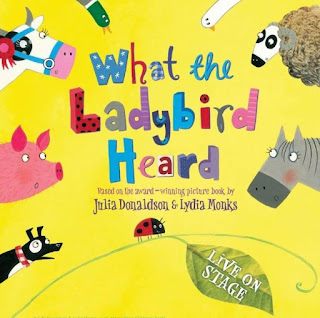 How do families with very young children keep their charges occupied during the August holiday when there is no school, and all their friends have all jetted off to the Costa Del Sun? Well, there is always the theatre! And even in the theatre wold's notoriously quiet month [largely due to holidays but also Edinburgh Festival has a lot to answer for in stopping theatres up and down the county functioning on anything like a normal level] it's comforting to know that What The Ladybird Heard is stationed at The Lowry theatre for almost the whole month.

Geared towards an audience of children of 3 - 5 years old - ie: those who have either read the book or had it read to them - the target audience remains the same. And, thankfully so does the story. Following the book very closely the stage is peopled with humans and farm animals as we witness the bungling attempts of two would-be rustlers trying to steal a prize cow from her farm shed only to be thwarted by the ingenious intervention of the ladybird.

I would imagine that a lot of the dialogue in this afternoon's performance would have gone over most of the children's heads - although I have to admit to laughing at a couple of the more cornier jokes - but you would need to be of a certain age to understand these. The songs were many, all very samey, very repetitive and went on for too long. The target audience was telling them this on every song, despite the mood being non-threatening, jovial and at a good volume.

The audience interaction was very good, as were the moments of silliness and visual gags that did engage the youngsters; but sadly these were too few and were not developed. It was almost as if the actors were given a frame-work in which they could play but there was no way they could deviate from this straight-jacket and extemporise further depending on mood and audience. That was a real shame because something such as this needed the actors to be as fluid and as flexible as possible, and I do think that the direction of this show was more a question of 'movement-by-numbers' than anything else.

The stage set was lovely. Realistic, busy and friendly. There were some nice touches too. The cars travelling over the field at the back, the cats on the window sill, and other bits worked excellently. The making of the animals was by far the most ingenious and most interesting part of the play for me - and perhaps also for the older children too. A goose, a horse, a pig, a dog, a duck etc all made from the farmyard bits and bobs and we marvelled at this because we saw the raw material before seeing the finished product. Clever.

Produced by Kenny Wax and Matthew Gregory, with Emma Breton playing The Farmer, Emma Carroll as Lily, Benedict Hastings as Lanky Len and Edward Way as Hefty Hugh, the show proved to be moderately successful. At one hour in length it did seem to drag in places as the story-line was stretched to its limit and beyond; the cod West Country accents felt forced and stereotypical, and the applause at the end came mainly from the adults. There was nothing actually wrong at all with this production; but there was nothing amazing, sparkling, fantastic, or different about it either. It worked and ticked all the boxes, and does offer the hassled parent an hour's diversion for their young'uns!