REVIEW: The Princess And The Giant - Ordsall Hall Gardens, Salford. 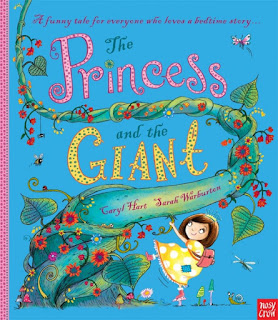 Folksy Theatre, a company specialising in touring outdoor productions for children, visited Ordsall Hall in Salford today to present an adaptation of Caryl Hart's 'The Princess And The Giant'. Hart's story takes inspiration from other already famous fairy tales, and cleverly amalgamates the ideas into her own narrative.

A village presided over by a King and Queen are unable to get any peace, especially at night, since high above them at the top of a beanstalk lives a very noisy giant.  The Princess, a plucky young lady called Sophie, decides to take matters into her own hands, and climbs the beanstalk to ask the giant to stop making so much noise so the villagers can live in peace. First she brings him some porridge to eat (Goldilocks), and then a teddy bear for him to cuddle, and then a pillow for him to be comfy, but all to no avail. Finally, after threats of army intervention, she decides to try one last time and reads him a bedtime story. He sleeps soundly and the town is at peace. Suddenly the giant starts to bellow again and comes after Sophie. All he wants is for her to read her another story, and so she asks for a huge book to be printed so that she can teach the giant to read the stories himself. All ends happily ever after.

Folksy Theatre advertise that the production is for age 3 years and upward, and some of the dialogue, especially at the start of the show was most definitely pitched too high for the youngest audience members, but the three-strong cast did slow their speech down and speak louder as the play went along, obviously judging correctly that they were losing their audience.

The performance was acted on a small circular dais erected in the Hall's garden, and we brought our own seating and eating. The set included a large beanstalk, an even larger giant (puppeteered by one of the cast) and various musical instruments and small props. All of this worked very well indeed, and the changes were swift. What didn't work so well sadly was that no-one really bought into their clothing. I say 'clothing' since one could hardly call them costumes! The youngsters wanted to be transported to a magical mythical kingdom where Kings and Princesses wore regal fairy-tale costumes and unfortunately we were given a King wearing jeans, trainers, and a battered old jumper, whilst the princess wore a rather plain yellow dress with a pink cardigan and pink trainers. Very much a let down I'm afraid.

The songs were good and the audience interaction and participation excellent. Very little at first building this more and more the further they went into the play and having all the audience standing and doing simple movements to the songs and cheering along by the end. The use of repetition was also excellent as the youngsters soon were able to understand the moves and the melodies. The water pistols also was a fun and well-received idea.

Vocally though the three cast were weak. Without microphones projection and enunciation are paramount, and sadly much of the dialogue was lost on the wind especially from the two actresses.

Darren Thorpe played various roles within the play, and he was the only one of the three I was able to hear consistently throughout. His Welsh soldier was a joy. Bringing in just the right amount of physical comedy for the children to laugh at. Pity it came a little too late, before this there was no comedy at all, and one young girl was frightened and screamed at the sight of the giant, despite it being presented in a child-friendly way.

Kathryn Louise played the Queen (and sometime narrator), whilst the role of the Princess Sophie was taken by Tayla Buck, the quietest of the three and even close up I was straining to hear her singing above the instrumental accompaniment.

The show lasted an hour, and amazingly the vast majority of youngsters stayed and were attentive until the end. That in itself speaks volumes. With just a little more thought about bringing the vocal volume up and making the characters a little more larger than life and funny / entertaining, this would be a first rate children's outdoor show.