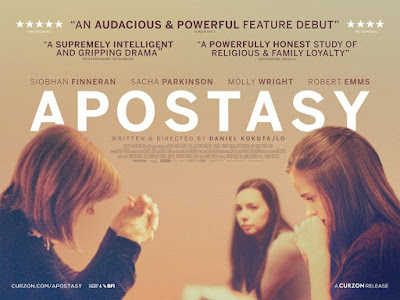 Writer / director Daniel Kokotajlo has brought an astounding cinematic debut to our screens. Starting slowly and keeping this pace throughout, Kokotajlo uses naturalism, realism and real-time drama to stunning effect, as there are no extraneous background music sequences, and not a second of film time is 'padding'. The film attempts to make the observer a part of the film's action, and we aren't simply bystanders but we are embroiled and complicit in the film whether we like it or not.

The film tells the story of a family of three women. Ivanna (Siobhan Finneran) is a single mother (we never find out what happened to the father), and is a staunch and devout Jehovah's Witness, bringing her two daughters up in the faith.  The elder daughter, Luisa (Sacha Parkinson) is at college and although still firmly a believer, she is exposed to so many other opposing beliefs at her college that she quite naturally starts to question. She is also holding a secret, which, once she tells her mother about, causes untold problems for her. Luisa is pregnant, the father is not a Witness, and she intends to keep the baby. This is enough for her to be 'disfellowshipped' and her mother is ordered to disassociate herself from her own daughter and only communicate when absolutely necessary, otherwise she too might face being thrown out of the church.

There is also a 'problem' with her younger daughter too. Alex (Molly Wright) was given a blood transfusion by the hospital at birth in order to save her (despite the efforts of the Elders to stop this), as Alex suffers from anaemia. Alex, religiously fervent and naive, at 18, tells the doctors that she is now old enough to decide for herself how her life shall be lived and reading a book with images and chapters about many other children who have 'died for their faith' she finally succumbs and dies a needless death refusing medical help, as her mum holds her hand.

Much has already been written about this film and how Kokotajlo's sensitive and yet damning portrayal of how three lives can be completely ruined and torn apart because of rigid and sometimes nonsensical rules of your faith. Kokotajlo himself a disfellowshipped Witness has often remarked that leaving the faith was for him a very liberating experience, and now, in this film, he has very cleverly, brought us back into the closeted and claustrophobic sect non-judgmentally. He portrays the Witness community with realism and doesn't try at any point to sway the viewer one way or the other. He simply presents the facts to us, and we, just as Ivanna at the end of the film, are left emotionally wrought, torn between her love of the community to which she belongs, her faith, her beliefs and her entire life, and something else... the unknown, the world beyond her own. We are left to make our own minds up.

The acting from all the cast is real and totally believable. Never for one second do you feel that there is anything sensationalist or over the top. It's all low-key and underplayed, but perfectly measured. Wright's portrayal of anaemic Alex, caught between the devil and the deep blue sea, is captivating. She narrates the story up until her death too, and all the emotion is bottled up, her voice hardly betraying her true feelings, but her eyes give away everything. Very clever. Parkinson's role as older sister is no less astounding, allowing her emotions to overflow and embarrass the Witnesses as she shows her human and motherly side. One of her final lines saying that she doesn't blame her mother for any of this was one of the hardest for her to say, and we see this. It's a fleeting moment, but it's there, and Kokotajlo captured it. The most interesting role, their mother Ivanna shows Finneran as a woman in personal emotional turmoil. She travels from the security and knowledge that her faith is right and true and that she is doing only the best for her two children, to nagging self doubts and a state of total insecurity as the film closes. It is a truthful and astonishing piece of acting.

What makes this film even more interesting for me too is that it is a local exposé, having been filmed in Oldham using mostly local actors and those who have knowledge of Jehovah's Witnesses. Further, this is real. This disturbing insight into this religious 'cult' has been acknowledged by several Jehovah's Witnesses to be an accurate representation of their code of behaviour and lifestyle.

There is no denying it is a bleak film with little respite, and little hope; although Luisa does offer her mother a 'get out of jail' card at the end, despite her irrational attempt at kidnapping her baby daughter. The film packs a powerful punch and manages within the 95 minute running time to involve you in a truly moving story that few modern directors / films completely are able to do. This is no Hollywood 'cheese'; this is hard-hitting Northern grit and is, despite everything, a family drama, one in which religion tears the family unit apart, for ever.