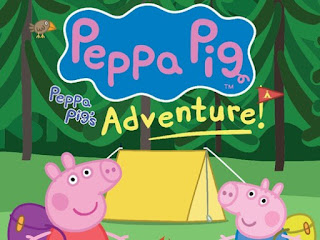 Although I don’t have children of my own, I’m still somewhat of a Peppa Pig expert - having three young nieces (8, 5 and 3), who have all been huge Peppa fans since the moment they were first introduced to the television around the time of their first birthdays. My youngest niece, being the biggest fan of the three, has had me sitting through back-to-back episodes on YouTube, eating Peppa Pig themed birthday cake and playing with various Peppa Pig toys, making me recreate various TV episodes, from adventures in a camper van to Peppa and George’s classroom and family home.

Today however was a totally new experience for me - getting to see the well-loved characters brought to life on stage in a live action feature length story of Peppa and George’s adventures with their classmates. Whilst unfortunately my youngest niece wasn’t available to travel the 30-some miles to Salford’s The Lowry Theatre, I was able to bring along a friend and her three-year-old son, another avid Peppa fan and what was his first ever visit to a theatre. Having little memory of any events which took place before my tenth birthday, I was unsure what to expect, given the target audience of Peppa Pig being pre-school children, and whilst I see on average six to ten theatrical performances per month, I’d yet to be a part of something that is suitable for pre-school children.

However from the moment we sat in our comfortable seats, the relaxed atmosphere and several pre-show starter warnings (along with the shows TV theme tune snippets), made the excited hundreds of pre-school kids both relaxed yet excited at the same time as the fervour built up in the auditorium.

Soon we met Daisy, (Bronte Tadman), a young girl about to start her first day at Peppa’s school who introduced herself to the young audience and soon had them joining in as we helped search for Peppa in a game of hide and seek. Once Peppa was found we were introduced to the rest of the gang - George; Peppa’s younger brother and the youngest class member, Suzy Sheep, Gerald Giraffe, Daddy Pig and Mummy Pig and class teacher Madame Gazelle. The audience took part in class registration and learnt that not only was today Daisy’s first day at school but it was also the day the class were taking a camping trip!

With Daddy Pig driving the school bus we were soon heading into the woods, ready to watch for all the animals which “only come out at night”.

The puppets, set against a bold bright colourful set which was a perfect replica of the cartoon scenes, from the school to the woodlands, made the production both magical and easy viewing for the very young audience. The three year old boy (my friends son) became engrossed in the atmosphere and story telling within the first sixty seconds, and loved the constant audience participation moments from singing songs, reciting nursery rhymes and counting, there was a real emphasis on team work, a theme that was reinforced and discussed throughout in a way a three year old could easily grasp the concept of. There was rain whilst camping and myself and the surrounding pre-school kids revelled in getting soaked with real water and were encouraged to get up and dance in “muddy puddles”. The only downside to this is that when the 50 minute production (plus an interval) was over, my newly found three year old theatre convert companion was wanting to go find real muddy puddles to play in!  Luckily there weren't any to be found in Salford!

I always say how much I look forward to my three nieces growing up so that I can introduce them to my love of theatre, but after today I now know I don’t have to wait anymore, and look forward to the next live production featuring Peppa Pig. I was disappointed to find out today was just a two show day with no further dates in Salford, so now I eagerly await another opportunity so that hopefully I can get the same satisfaction that I did today, seeing a pre-school child light up as they experienced theatre for the first, but certainly not the last time. A must for Peppa fans old and young! 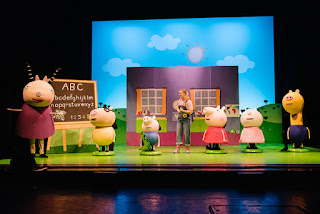 Number 9 do not give star ratings, but if they did then this would be 5 stars without question!