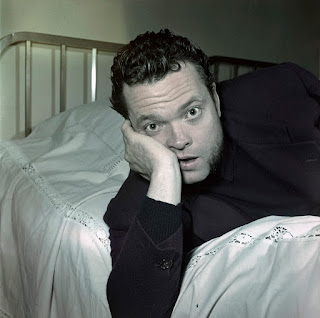 One thing is evidently clear, film-maker and documentarian Mark Cousins is in love with Orson Welles; or at least in love with the Orson Welles that Cousins believes him to be!. His irritatingly sycophantic drawled voice-over from start to finish of this 2 hour documentary consists of a series of love-letters - imaginary letters which Cousins 'writes' to Welles. He informs him of how the future has changed since he died, and how technological advancements would have pleased and fascinated him; and he also takes us, the viewer,. through a whole box full of drawings and sketches which Cousins has been made privy to, which he fawns over and uses them to compare and contrast his fine artistic genius to his work in front of and behind the camera lens as well as on stage.

The sketches - most of which have never been seen in public before - are interesting and have artistic merit, but irritatingly Cousins uses a cinematic technique to recreate the drawing of these sketches rather than letting us just see and appreciate the finished articles.

The film takes the form of 5 'Acts', and each is subtitled. Cousins does give a very intimate and personal profile of Welles, and does impart information which I had not previously known, therefore proving informative too. Cousins talks about his directing style, sharp angles looking upwards, and compares Welles to a King. In one act of the film, he even uses an actor (Jack Kleff) to recreate an imaginary reply from Welles in the form of a letter back to Cousins. It's a little sickening and certainly not your usual documentary style, but it is heartfelt.

We learn that he studied art in Chicago and never had any great designs on acting. He started painting at the age of 9, and has probably thrown away more artworks than are extant. It was art, magic and bull fighting which thrilled the young Orson, and when older, politics. We hear Welles quote, 'I don't take my art as seriously as I do politics' and indeed in his younger more rebellious days, he meddled in politics through theatre with pieces such as 'The Cradle Will Rock'.

His world travels and the rise of fascism with Hitler rising to power in Germany had profound effects on Welles' outlook, and so in 1936 he produced and directed the first all black Afro-American production of MacBeth to great critical acclaim.

A friend of his was quoted as saying that Welles was like a lighthouse; when you are caught in his beam, it is dazzling, but when the beam moves on there is a black void.

Cousins though continues to laud Welles, and uses words such as 'intense' and 'passionate' 'powerful', and 'glory'. Welles however sees himself more of a satirist and has always been able to see the absurdity and childishness in his films and characters.

As Kenneth Tynan once concluded about Welles, 'The bee will always make honey'. Cousins leaves us in no doubt that Welles is still making honey from beyond the grave as his films, TV appearances, and especially his drawings make a glowing and rich testament to a man who was sharp, angular and groundbreaking behind the camera lens and uncompromising and regal in front of it!