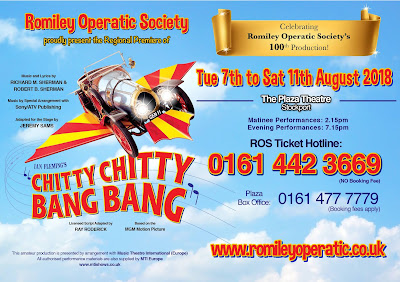 What better way for Romiley Operatic Society to celebrate their 100th Production than by presenting the North West Amateur Premiere of perennial favourite Chitty Chitty Bang Bang - and yes, before you ask, it was the car used in the pro shows, and yes, it did fly!

I had never seen a production by this society before, and so had no idea exactly what to expect, nor what the standard would be. However, this was by all accounts a phenomenal production! From the moment the opening bars of joyous orchestral opening music were heard I knew this was going to something a little bit special, and I was not wrong! The opening chorus, superbly costumed, was sung to perfection, and I was completely hooked.

I have seen the film more times than I am prepared to admit, and have seen the pro show more than several too, with various actors taking the lead of Caratacus Potts from Michael Ball to Jason Manford. I have seen Gary Jones-McCaw in various productions over the last few years, and have always been more than impressed with his triple-threat 'Music Man' persona. None of his characterisations though suited him more than this evening's. He fit the role like a hand to a glove. Utterly excellent.

Sarah Thewlis was an admirable co-lead and held her own throughout - her Doll On A Music Box was perfectly timed. However she was just a little outshone by the two Potts children, Jeremy and Jemima, who this evening were 9 year old Harry Wilbourn and Lenka Shaw. Both gave simply wonderful performances, giving the adults a run for their money!

Completing the family was Grandpa Potts, the rather eccentric ex-army Major who, this evening was given a comical but centred make-over by Martyn Preston; very cleverly taking some of the more memorable attitudes of former characterisations and blending them with his own blend of caricature.

What was quite surprising with an amateur company was the number of roles which were doubled. This is, due to budget, de rigeur with professional companies, but here, where none of the cast are being paid for their talents and their time, I was surprised to see that 4 actors / actresses played two roles within the show. Paul Allison was The Junkman and a hugely malevolent and evil-looking Childcatcher (scaring me, never mind the children!); Ben Drane played Mr. Coggins and The Toymaker (a very empathetic and real portrayal). Steve Harrison was both Lord Scrumptious and Baron Bomburst, giving each a great characterisation; blustering with just the right amount of fun; whilst his 'other half' in both instances, Miss Phillips and Baroness Bomburst was played with outrageous almost pantomimic mock sincerity by Julie Proffitt.

Completing the principal line-up are a couple of bungling comedy spies, very much in the mould of the two policemen so often found in Aladdin. This is one huge problem with this Musical, that because of the nature of the characters and their obvious monodimensionality and comedy-style, the show could easily descend into a full-blown panto. Congratulations the to both Scott Lees (Boris) and Andy Gibson (Goran) as well as director Michael Jones-McCaw for not allowing that to happen.

The show did have some 'eggy' moments in it; especially things technical which seemed to go awry somewhat. Lighting cues coming on late, and the total lack of any moving image on the screen behind as the car travels to the beach picnic and is subsequently chased by the Vulgarian battleship. I hope that this was just a fault on the side of the crew rather than intentional; it looked very blank and sparse without anything to reference the songs and dialogue with.

It was also a huge shame to have allowed the dog to come on stage during Hushabye Mountain. McCaw was completely upstaged and ignored as the audience ahhed and laughed at the dog ignoring the song completely. However using the dogs at other times worked superbly and the end of the Sweet factory scene was excellent. Mic levels were also a problem this evening. The band was too loud to start with and so the cast were given a level above this and the whole became rather ear-piercing at times. I am uncertain as to why the band even needed mic'ing in the first place.

The choreography, under Tracy Harper, was superb. There was not a moment or a move which was beyond anyone involved and all were animated and on cue every time. Me Ol' Bamboo was my showstopping favourite and was superbly executed.

Finally a huge credit to all the chorus and children who filled out the stage not just with their bodies but with superb acting, wonderful harmony singing and great costumes!

Knowing as I do the limitations Stockport's Plaza Theatre stage has, this was truly a spectacle that no-one should miss. The car of course is still the star attraction as always, but Romiley have added dogs, a fine and talented cast, and a whole bunch of skilled creatives to make a truly scrumptious show which certainly does prove that with teamwork, a dream can come true!