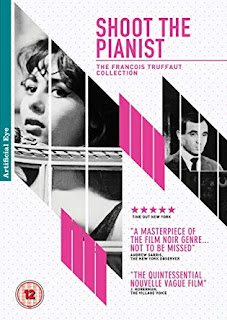 Tirez Sur Le Pianiste, to give the film its original title, is a 1960 French classic which defines the 'Noir' genre. Directed by Francois Truffaut and starring Charles Aznavour as the titular pianist, this was a ground-breaking film in its day, and still packs a sizeable punch today, using cinematic techniques such as long voice-overs, snap-cuts from one scene to the next, angular shots and even out-of-sequence editing of the scenes.

In order to follow this bleak melodrama you have to watch it carefully, there are no plot spoilers along the way in the film, which makes for compelling viewing.

Charlie Kohler is a piano-player in a seedy bar in the wrong part of town. He doesn't say much and keeps his head down. The waitress Lena is in love with him, but he pretends not to notice. A man running down an unlit street being chased by two hoodlums staggers into the bar and announces that the pianist is his brother. He then tells him that the hoodlums intend to kill him and, whether he likes it or not Charlie is now unwittingly an accessory.

Flashback to an earlier, happier time. Charlie Kohler is not Charlie at all, but his real name is Edouard Saroyan, an international concert pianist of some renown. His marriage is on the rocks however, and after yet another tiff his wife throws herself out of the 5th floor window killing herself almost immediately. It is Saroyan's way of forgetting that he thus reinvented himself.

We then further learn that he has a young son, and once his son is kidnapped by these two hoodlums, things start to get serious. Saroyan's family are all crooks and thieves and have fallen foul of an even fouler gang who want revenge. To add further complications to the story, he has a brawl with the bar owner over Lena, who is now his girlfriend and his boss, Plyne, doesn't like that. During the brawl he accidentally kills Plyne to save his own life, and so becomes a fugitive himself. This all ends with them hiding out in their parent's house in the alps and a shoot-out which sees Lena, the innocent in all of this, the only one to take a direct bullet hit.

Filmed in black and white, the images are stark and bleak, which superbly mirrors the mood of the film in general. Aznavour plays the part with an air of nonchalance and diffidence until it becomes too personal even for his aloofness and then we see how he really is the brother of those who operate on the wrong side of the law. Marie Dubois plays a rather sultry role at first as waitress Lena, but her aloofness withers much quicker than Aznavour's and despite her being killed at the end, the film shows the roles of the women (Lena and Clarisse) to be in many ways much stronger than the male roles. Quite avant-garde thinking for 1960 perhaps. Clarisse (Michele Mercier) is a prostitute living next door to Kohler / Saroyan, and their relationship is not only sexual but she is something like a surrogate mother for the young boy too.

They simply don't make films like this anymore, and that's a pity! Gripping, moody, and superbly acted and directed. In French with English subtitles (which were not always the best or most accurate.. but they were sufficient!)