NEWS: cast announced for the next Hope Mill Musical, The Return Of The Soldier. 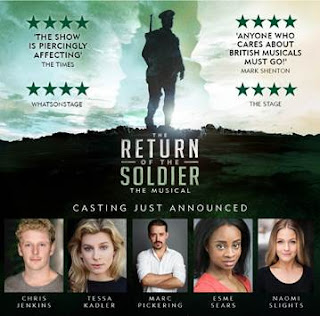 CAST AND CREATIVE TEAM ANNOUNCED
THE RETURN OF THE SOLDIER

The cast has been announced for musical The Return of the Soldier which has its regional premiere at Hope Mill Theatre in Manchester next month, following its critically-acclaimed London run in 2014.

The show, the fourth in-house production at the award-winning Ancoats theatre, is a musical adaptation of Rebecca West’s remarkable novella written at the end of World War One, with music by Charles Miller and a book & lyrics by Tim Sanders.

It comes to Manchester following its critically-acclaimed premiere at the Jermyn Street Theatre in London in 2014.

Set in Harrow during the summer of 1916, The Return of the Soldier is an intensely bitter-sweet tale, dissecting the very different love of three women for one man. When Christopher returns from the front, shell-shocked and with memory loss, there are profound consequences for all three women and their love. In the end, only an extraordinary sacrifice will restore the fragile status quo.

Composer Charles Miller puts a unique and contemporary twist on several English music styles from the period in his evocative score. Tim Sanders’ script aims to capture West’s sardonic and contemporary humour as well as her painfully accurate insights into human folly. This exciting new musical adaptation will bring a compelling story of war to a whole new generation.

The Return of the Soldier runs from Thursday 6 September to Saturday 29 September 2018 and is the fourth of five in-house musicals in 2018 from the successful and ambitious collaboration between Joseph Houston and William Whelton, co-founders of Hope Mill Theatre and producer Katy Lipson, from Aria Entertainment, resident producer and co-Artistic director of Hope Mill theatre. It follows the five star revival of Andrew Lloyd Webber’s Aspects of Love, which closes this week.

Katy Lipson said: “It couldn’t feel more perfect to bring a new British chamber musical The Return of the Soldier to the beautiful Hope Mill Theatre four years after its first London workshop to coincide with the centenary of World War One. We are incredibly lucky and excited to be working with yet another wonderful group of performers to bring this powerful and emotional story to life.”
The Return of the Solder is directed by Charlotte Westenra, musical direction by Daniel Jarvis, choreography by Matthew Cole, lighting design by Aaron J Dootson, sound design by Findlay Claydon, set and costume design by Simon Anthony Wells/Leah Sams and casting by Jane Deitch.
Aspects of Love is produced by Katy Lipson of Aria Entertainment, William Whelton and Joseph Houston of Hope Mill Theatre and Guy James.
Following Aspects of Love at Hope Mill Theatre is Putting it Together that runs from Wednesday 24 October to Saturday 24 November 2018