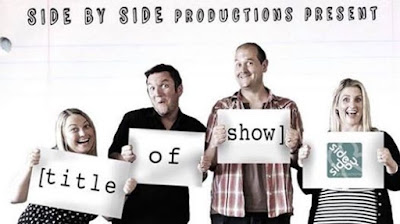 Do you ever have days when you really feel like you simply could not be bothered to do anything? Even when you are waiting at the bus stop you feel like packing it in and going back home for a nice cup of tea? Well that was me last night, and I almost did capitulate to my inner ennui and go home without watching this fabulous chamber musical. I am however, extremely glad that I told myself to not be so silly and get myself down to Hope Mill Theatre without further ado.

The show's title, is, [title of show]; which isn't at all odd once you understand the premise of this show. It is basically a Musical about two men trying to write a Musical whilst writing their musical. What could be simpler?! And even when they complete their musical and it is performed off-Broadway, they are still characters in their own musical, and somehow are still in the process of creating more material for their musical which has to end somehow....!! Basically the show is its own creation; a work-in-progress kind of show! To be fair, it's makes much more sense and is easier to understand by watching it than by me trying to explain it!

The show is written very much in the Revue Musical style, with an off-Broadway feel and although the music is derivative [deliberately so!], and the action is something akin to a live vlog, this minimalism and self-effacing humour works very much in the show's favour. It is a musical with four characters, no costume changes, 4 chairs, and a pianist.

We are in New York City, and two gay friends Jeff (Mark Wood) and Hunter (Tom Guest) have been thinking about writing a musical together for some time. An opportunity to do just that comes along in the form of a competition for new musicals and against all the odds - with three weeks only until their deadline - they decide to go for it.  This is the story of how they decided to go for it; what they did in those three weeks - the storyline of the musical is the musical - and also what happens to them after their moment of fame starring in their own off-Broadway show for a limited run.

Wood and Guest are absolutely brilliant in their roles. Two better actors could not have been found. Their chemistry together was wonderful, their NYC accents totally believable and their acting and singing abilities were of the highest calibre. Helping them along in their musical-writing quest were two females - both friends of Jeff and Hunter and both out-of-work actresses trying to get out of the roundelay of day jobs and auditions. Heidi (Donna Metcalfe) was the experienced one who had appeared on Broadway twice already - albeit in understudy/ASM roles - whilst the more sassy and outspoken Susan (Hannah Davis) always seemed to have a chip on her shoulder. Their roles were less well defined - perhaps due to the nature of the writing - but they still proved their worth in their solo songs / moments. It was in their quartets where they were sadly a little inaudible.

There is a fifth cast member in this show too, although the other four do their best to ignore him. Larry, the keyboardist / pianist. (Simon Murray). He is omnipresent and as much a part of the show as the others. He interacts with them, even rehearses songs with them, and his character is one who is used to being ignored, continually eating and shrugging, his minimalist movements and back-chat made the perfect foil for all the frippery of the main roles. Not only that but he really was the actual Musical Director as well!

Despite this being a 20th century creation by Jeff Bowen and Hunter Bell {yes, the writers of the show even used their own real names for their characters!}; as a couple of the lines in the show do make notice of, some of the jokes and cultural references are already passee and will definitely go under our British humour / cultural knowledge radar (and they did!) but surprisingly the references to garner the biggest laughs this evening were the two Sondheim musical quips. I do think though that some of the names and musical show titles should be updated if it is going to become a more well-known musical both in the present day and in the UK. Surely a musical of this nature needs to keep evolving in order to stay relevant?

That being said though, with creative and sensible direction by Mal Wood, the show was extremely enjoyable, funny, human, touching, and true to life. The four (sorry, five!) strong cast members brought this perhaps awkward show to life beautifully and, as chamber musicals go, this one has to be on the top of my list!