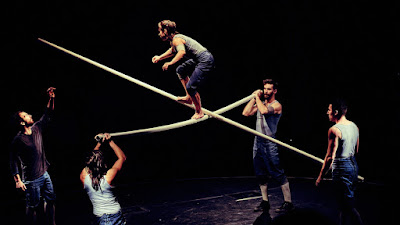 Contact Theatre are out and about in the city while they await the completion of their renovated building, and for this show, they could not have found a more ideal location. The Upper Campfield Market Hall is at the top end of a long row of Victorian warehouses; a hive of industry which saw the world's first passenger railway among other things. Only yards away is this Victorian hall, now an event space, and with its high ceiling and lofty emptiness it is very easy for the mind to visualise a Big Top and a band in the corner striking up 'The March Of The Gladiators'!

The seating has been fixed and arranged in the round with a large performance space in the middle adding to the circus feel, and metal scaffold holds the whole up.  But this is modern circus. There are no ringmasters, clowns and performing elephants here. What we do have however is the modern day high-wire / trapeze artistes who have taken acrobatics and aerial work to a whole new and exciting level. These performers from a company with the curious name, Ockham's Razor, are physical theatre performers specialising in balancing, pole and aerial work.

Their main piece, Tipping Point, takes just 5 performers and several light but sturdy metal (?) poles, and despite the lack of narrative or indeed anything other than a perfectly synchronised and fitting musical score (Adem Ilhan and Quinta) they perform the most amazing stunts in a tit-for-tat sort of play. They 'challenge' each other and taunt each other, and just when we think it is impossible, they don't just do it, but do it so effortlessly and with flourish that they make these death-defying movements look so easy and fun. If you sit on the front row, then be prepared to have both pole and performer only millimetres away from you at times; but it is a skilful and measured millimetre and despite the element of danger, (which actually makes it all the more thrilling), we know that in reality we are safe.

The theme of the piece is finding that point in balance when the level is tipped, and what happens when it is tipped and how can they play and experiment with that point of tipping... the tipping point! The underlying message in the piece is 'teamwork' and 'trust'. These 5 performers, Alex Harvey, Telma Pinto, Steve Ryan, Emily Nicholl, and Sadiq Ali, are all most definitely at the top of their game and in their prime. I remember being asked once about Ockham's Razor, and my reply was that they are a little like Cirque Du Soleil but more intimate, more nuts and bolts, and better!  There is no glitz and glam here, and there are no gimmicks. You see them go through their safety checks, putting the harness on, or fixing the pole to the bar; that's all part of the show for them, and the show benefits from allowing us to see this.

There is also another very clever image in Tipping Point which solidifies the circus idea. At the very beginning they form as chalk circle on the floor.... the circus ring inside which everything is 'magic' and they rarely if ever cross that line. The end we see them perform a similar idea, only this time the circle isn't true; it's distorted, and oval, but it just keeps going, making a symmetrical pattern of overlapping ovals. There is deep imagery and symbolism in this very simple gesture - and it is also quite beautiful too.

Prior to this however, there was a short 20 minute piece called Switch. Ockam's Razor have used 9 students for this work, and they have devised it together. Using many wooden staffs the performers start with threatening almost martial art style moves switching between manipulator and manipulated; killer and victim, until they all come together as one. The staffs are used all together here as we switch from weapons to animals; perhaps lions / snakes, as the cast allow their 'animals' to 'see' the audience. There is some movement, acrobatics, and finally one of them is given all the canes to carry herself. There are many canes and she struggles to take them across the stage. Her comedy skills coming very handy here as she balances and tries to pick up the fallen ones only to be left with one - the smallest and lightest - by the time she reaches the end of the stage.

For this piece sound / music was provided live by Bellatrix; sampling and mixing her own vocal skills with an electric keyboard, the sounds she produced were unique and singular, making a striking soundtrack to the unfolding Kabuki-inspired moves of the 9 performers.

Tipping Point however was obviously the showcase piece, and is a piece of theatrical circus that needs to be seen to be truly believed and properly appreciated.