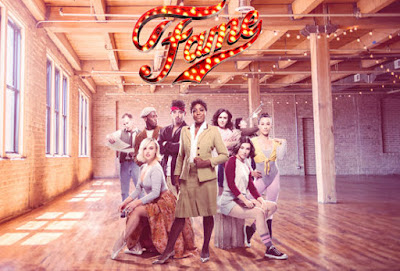 Fame – The Musical is based on the 1980 film which also spun off into a TV series during the early to mid-1980s. The concept follows a group of young students who have been chosen to attend the New York School of Performing Arts (referred to as simply PA) – they have all been chosen because of their potential to succeed and go on to a career in show business.
There was a large and impressive set for this production of Fame, set against a background of black and white photographs – all of which looked very much like they were taken in the 80s based on clothing and hairstyles. The set was relatively static with stairs up to a balcony covering the width of the stage, frequently used throughout the performance, with smaller pieces of scenery such as lockers, desks, chalkboards being wheeled on and off at the relevant times.
The first half of the show was a little slow to say the least.  I completely understand that we needed to get to know the characters but it felt like the opening scenes were longer than they needed to be.
The main characters were Tyrone (Jamal Crawford), a hip hop dancer with all the talent to go right to the top of his field but seemingly without the attitude to knuckle down and go through the classical training. Tyrone was partnered in his dance class with Iris (Jorgie Porter) who is just about the complete opposite of Tyrone – a ballet dancer who is driven to and from school in a long black limousine. Tyrone is singled-out for both praise from his drama teacher (Cameron Johnson) and criticism from his more strict English teacher Miss Sherman (Mica Paris).
We also got to meet the rest of the cast including Joe (Albey Brookes) – a Latino student who seems more intent on his sexual interests than his education.  Brookes played this part expertly with every possible innuendo opportunity being taken, creating more than a few laughs in the audience. Mabel (Hayley Johnston) was very interesting character, she was portrayed as a dancer who desperately needed to lose weight and although I thought Johnston was excellent in this role, her appearance wasn’t that of an overweight dancer and I couldn’t help feeling that this lacked some realism.
Talented piano and violin student Schlomo (Simon Anthony) was an interesting character – his father being a very famous violinist and seemingly checking up on his son on a very regular basis.  Schlomo developed an attraction to Carmen (Stephanie Rogas), a very talented singer but with a drug addiction that is featured much later in the show.
There were many more key characters such as Goody (Alexander Zane), Lambchops (Louisa Beadel), Serena (Molly McGuire), Nick (Keith Jack), Mr Myers (Cameron Johnson) and Mr Scheinkopf (Graham Hoadly). The number of characters that were given almost equal stage time contributed to what appeared to be a very slow first half of the show.
The second half was much better, with storylines being tied up with a more hectic pace and some of the more emotional scenes. This is also where we get to hear the amazing voice of Mica Paris who played Miss Sherman – she has a singing voice which is full of true soul and passion. Her renditions of ‘These Are My Children’ and the ‘Fame’ soundtrack were simply incredible and prompted sections of the audience to give her a standing ovation at the end of the show.
This production of Fame has without doubt got flaws but the cast are very talented and it is a fun show.  The vast majority of the audience left having thoroughly enjoyed themselves – I left feeling that the show having enjoyed it but also feeling that it could have been so much better.
Reviewer – John Fish
on – 27/8/18