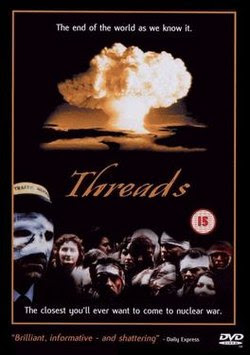 Originally broadcast on BBC Two in September 1984, Threads is a television drama which explores the impact of a nuclear bomb going off over Britain against the background of increased hostility between the United States and the Soviet Union. Seeing the drama on the cinema screen of Manchester’s HOME venue, more than thirty years after its initial broadcast, only added to the brutal impact of its unflinching examination of a society which is reduced to an irradiated wasteland where the survivors dwindle until the population reaches levels unseen since the medieval period.

Threads was scripted by Barry Hines, better known for his 1968 novel A Kestrel for a Knave and directed by Mick Jackson, better known for directing the 1992 blockbuster The Bodyguard. Prior to working on Threads, Jackson had directed a documentary film for the BBC called A Guide to Armageddon and was keen to explore the results of a nuclear holocaust through a more dramatic medium. The resulting work is an intriguing mix of Hines’ gritty, socially conscious depiction of working class life and Jackson’s documentary filmmaking background as informative voice-overs and onscreen text relay information about the devastation caused by a nuclear bomb and the plans the government have in place should such an attack take place, while the first part of the drama focuses on the lives of the people of Sheffield as they go about their day to day lives.

The drama, set in Sheffield, begins with young couple Jimmy Kemp (played by Reece Dinsdale) and Ruth Beckett (Karen Meagher) finding out that they are to be parents. They decide to get married and find a place to move in together, although there seems to be doubts that the relationship will last from Jimmy’s working-class parents and Ruth’s more middle-class family. Against this background, news reports begin to report on heightened tensions between the United States and the Soviet Union in Iran. As military action begins to escalate anti-war and anti-nuclear protests begin to break out in the city and people begin to stockpile food. In one of the few lighter moments in this otherwise bleak piece, Jimmy’s mother (played by Rita May) remarks the supermarket she is in is “busy for a Wednesday. You’d think it were coming up to Christmas!” Meanwhile, the British government’s emergency plan to hand control of running the country to the council leaders of the towns and cities across the various cities and counties is pushed forward and an emergency committee is established under Sheffield town hall to plan for the event of an ever-increasing nuclear attack.

This first half of the drama is very much a spiritual successor to Hines’ earlier work; Jimmy Kemp could easily be Billy Casper from Kes as an adult (he even keeps an aviary in his parents’ home), having to face up to taking on new responsibilities as husband and father. As the prospect of a nuclear bomb hitting Britain in the American-Soviet crossfire becomes more of a reality, televisions begin to play the Protect and Survive information films seemingly on a loop. These government produced films contrast a matter-of-fact British narration with the grim realities of nuclear fallout; a section of a film about disposing of a dead body after a nuclear attack is used effectively in Threads as people stop and stare into an electrical goods shop in the city centre where every television is showing the information film.

The turning point of the drama comes with the nuclear bomb going off over Britain and Hines’ socio-political concerns soon give way to the more visually dramatic film-making impulses of Jackson. From this point onwards, the documentary elements become more frequent as the audience as regaled with information about what happens when the bomb goes off and the drama shifts in tone from a ‘kitchen-sink’ drama to a more nightmarish, horror inflicted vision of life after the bomb. The section with the bomb exploding features some impressive editing work which really brings across the shock of the event, while the make-up artists did a fantastic job on the burn make-up on the actors who played the survivors. In a harrowing scene, Ruth walks through the burnt out remains of Sheffield, confronted with injured and sick people, and, tellingly, a woman holding the burnt corpse of a baby to her breast. In another gruesome scene, survivors begin to walk to the hospital and are treated by doctors using hacksaws to amputate infected limbs; these scenes are closer in tone to horror films. The emergency committee, meanwhile, have no clue what is going on and soon anarchy breaks out as the survivors struggle for food.

This second half of the drama does seem to meander a bit – the drama proceeds to show the after effects of the bomb for days, weeks, months, and finally over 10 years after the event. The grim imagery and bleak, nihilistic tone soon becomes grating but, one supposes, that is the point. After a nuclear attack, time ceases to have any meaning, humanity and civilisation falls apart and life becomes one desperate struggle after another.

Threads remains an important landmark in British television history and offers perhaps the most realistic depiction of what life in Britain would be like if we ever experienced a nuclear attack. It isn’t an easy watch by any means but, chillingly, resonates just as well in 2018 as it did 34 years ago.