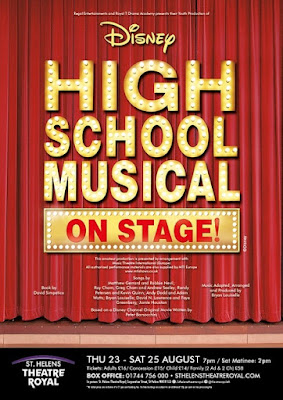 I was thrilled to be going to watch a production of one of my all time favourite films, High School Musical, at St Helens Theatre Royal. Put together by Regal Entertainments and Royal T Drama Academy – a local group for ages 7-18 years. This Disney smash hit is as well loved today as it was when it came out 12 years ago. Often referred to as a modern day Romeo and Juliet by critics it follows the story of two young love birds. Gabriella, an academically gifted  geek  and Troy, all round cool guy and star of the high school basket ball team The Wild Cats. After previously meeting on holiday to Troy's surprise Gabriella is a new student at his high school. They quickly become close friends and accidentally audition for the school's new musical. The social cliques they belong to don’t approve of the new friendship and try to come between them. Meanwhile jealous drama queen Sharpay Evans and her sidekick brother Ryan conspire to further hinder their chances. The two must struggle to make it to auditions whist also meeting their existing obligations and not letting down their friends.

I felt the set worked well throughout. It was always clear where we were with quick efficent set changes. The changing of scenes was also helped along by short bursts of fitting music. A lot of the scenes were in the school gym hall which had tiered seating at the back which worked great visually as students could sit and interact on these in the background without distracting too much from the main actors on the stage. The levels were also put to good use in some of the dance routines – particularly by the cheerleaders.

The story was easy to follow and I felt all the cast did a great job. Gabriella was played really well and the actress in that role excelled in both singing and acting. I felt she out shone Troy somewhat in parts and carried him a little in the singing department. However the twosome were a joy to watch as a whole had the audience captivated none the less. The actress playing Sharpay was perfect for the role. It was clear from the off who she was (helped also by fabulous costumes and blonde hair of course) she nailed the character giving her plenty of sassy attitude. Her body language was excellent throughout, eye-rolling, hair-flicking and generally bossy, strutting around the stage. I felt she did her job well as when she was on stage the audience were drawn to her. Ryan, her brother, was well received by the audience too. His was a very camp character and the actor portrayed this with little jokes throughout and a cheeky kiss blown to Troy at one point. Also worth a mention here is the character Jack Scott – he was the news reporter linking the story together. He delivered his lines with great animation and was very funny.

'Get Ya Head In The Game' was a fantastic number performed by Troy and the basketball guys. It is not easy to sing and dance at the same time but add in basketballs too and that is some fairly tricky choreography. The actors remained in time with the dance moves and the basketballs all bounced at the same time and went in the air together too. They also made there way off the front of stage and down each side of the audience whist singing, with the audience happily clapping along. I felt this was a nice touch. Aside from this the scene the whole audience seemed to love the most was the audition song. It raised lots of laughs as everybody performed their auditions so over the top. There were many on stage at this time and it was lovely to see much younger children in the groups singing and dancing along.

Only in one part were some lines messed-up but the cast went with it and made a further joke to the audience's delight. Troy came on stage looking for Gabriella but accidentally asked Sharpay “Do you know where Sharpay is?” Sharpay went with it and said “Why I’m right here Troy” and the audience laughed whilst Troy said he meant Gabriella.  Then as he walked past Ryan he made a further joke of it by stopping him in his tracks and telling him he was right there too with a cheeky look on his face to the audience. The audience were in stitches and even Sharpay struggled to remain composed. So funny and well recovered.

Of course the production was full of all the High School Musical songs, strongly performed by the cast with the dance routines to match – I recognised the same choreography as the film in songs like 'Bop To The Top' and 'All In This Together'. High School Musical will remain a classic for Disney and this production of it certainly didn’t disappoint. The audience were clearly entertained throughout. When we thought it was over like many we stood up to leave but then the cast came back on and finished with a medley of all the songs which was perfect as it left the audience on a high. I thoroughly enjoyed this production and would definitely be interested in seeing other pieces from this budding young theatre group.