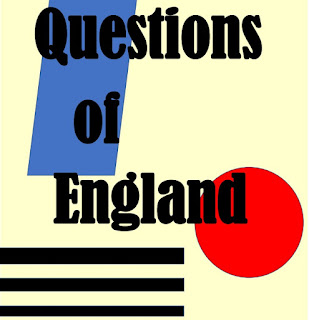 Presented by Not Even Theatre, this was most definitely a Greater Manchester Fringe Theatre Festival highlight; it also happened to be the final performance of the festival, and so made a perfect end to the whole for me.

Using a variation on a standard format, this was a cross between a quiz show and a comedy improvisation show. By cleverly combining the two and involving the audience as much as possible, they created an intimate and safe atmosphere for 'play' and 'discussion'.

Mark Reid has been travelling the length and breadth of England for many years - in fact one of his ambitions so he tells us, is to travel to every single town in England before he dies - and has collected (and still continues to collect) a whole array of interesting facts and figures about the places he has been to. He has a whole pile of questions.... thousands of them!

In rapid-fire succession he reads the question out, and if the question sparks the interest of the improvisers - this evening a team of three (Rob Stuart-Hudson, Lynne Crook and Jess Napthine-Hodgkinson) - or if they know the answer, they ring the bell. Reid stops, and the team will either perform a zany improvisation on the subject, or there will be an 'academic' discussion with the audience about the answer. If an audience member knows the answer they are also free to answer and join in. As Reid stated it was not their show, but our show.

An hour-glass counted down the time, and as the last grains of sand fell, quite amazingly on cue, as one of them just finished making up a terrible Limerick, I was sad. The hour went by so quickly and I could have stayed for much longer. The three improvisers were undoubtedly talented and enjoyed working together, and their energy and enthusiasm for this was infectious. I would unhesitatingly recommend this informative and fun show, and can't wait to go and see it again!