REVIEW: Circa Tsuica: Now Or Never - A Big Top outside The Lowry Theatre, Salford. 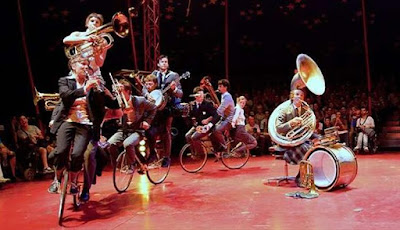 A travelling French circus company, who live in their own commune in Saint Agil, have perfected their unique art of a Brass Band circus. All the performers are not only circus performers [they were all studying at the Centre International Des Arts Du Cirque and formed not only friendships but their fledgling company at that time] but all are proficient singers and they are play musical instruments - in fact they form their own Oompah Band making the music [almost continuously] at the same time as performing their circus antics.

The show is a delightful and humorous 90 minutes, and the performers [no programme and so unable to credit] are endearing, open and highly skilled. As we enter the tent, we are all personally greeted by one of the cast who will, a la style Europeanne, kiss you on the cheeks and hand you a small glass. The stage is set with two crepe stands and two tables full of small nibbles and juices. It's all free and it's all a part of the show. The audience are invited to help themselves and as we queue (how British) for a French pancake and some French dilutable cordial the brass band strikes up and plays in and around us making us feel just as much a part of this show as the performers themselves. There is no pressure for us to return to our seats quickly, just to stay and enjoy the atmosphere.

Once the majority of audience were seated one of the troupe sang a gypsy like melody accompanied by the rest , and then they started their modern-day clowning. Balancing on bicycles started this sequence. This gave way to an extended audience participation sequence and another vignette about playing music from the carcasses of pigs  (more on both those in a minute!) and then there was some large hoop work, high trapeze, and seesaw acrobatics to finish!

The way in which the troupe engaged and used the audience throughout was wonderful. In fact it was a masterclass in audience manipulation and participation. Audience members were used at different points throughout the show and it was done in the most lovely and unobjectionable of ways.

The section I refer to above was when they used two men, first of all to play a trust game with them, and then to become the King and Queen in a country festival procession using more audience members - this time young children - to pull the float round the stage. The company also used members from a local band to play with them in both this section and a couple of others [again - no programme - no idea which band].

The one section which personally I hated, it seemed in rather bad taste and was certainly not suitable for young children was the extended sketch which saw a herd of pigs rounded up and put into a cage, where they died, and were brutally dragged out and given musical instruments. The 'mafia' style killers (wearing sunglasses) then proceeded to stand on the pigs or manipulate their limbs in order for them to hit the drum or blow air into the brass instrument they had been given. Admittedly it was clever, but it was also macabre and out of tune with the rest of the show.

Whilst I am on the subject; the show is advertised as being suitable for all ages. I would strongly disagree with this sentiment. The band is very loud, and they do stand right next to you at times and so the noise levels can be just too much for some - especially the banging of a big bass drum. Further, there is a lot of loving, and simulated sex going on in this show too. Part of their bicycle balancing act was showing couples have simulated oral and actual sex, there was a lesbian kiss on the high trapeze, and we saw too much underwear from both male and female participants. Highly inappropriate for the young I have to say. Had it been advertised as 18+ or even PG then it would have been OK.

From my adult perspective however, I was watching a humorous and highly skilled professionally put together piece of physical entertainment. The troupe's talents and abilities are unquestionable and the show itself was a sheer delight. I absolutely loved it, but I am an adult, watching an adult circus!

The final leap across the podium from the seesaw was incredible, and to be so up-close and personal with the performers - to be able to see their beads of sweat and interact wit them was something that rarely if ever happens in theatre and this was exciting.

I would absolutely recommend Circa Tsuica [Romanian for 'brandy' apparently!] - they are amazing! - but be warned, parental guidance is absolutely necessary!