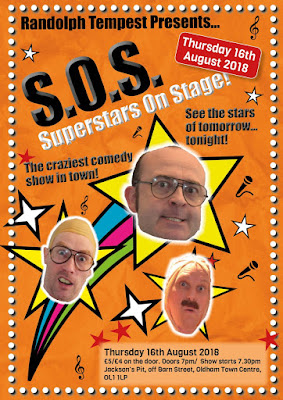 With SOS Comedy billing itself as ‘The Craziest Show in Town’, it would be a poor challenger who took them on by claiming to be crazier. This is a truly bizarre show which maintains pace throughout with a plethora of curious personages, ranging from original characters to purposefully tribute acts to celebrity satires. The show is too off the wall to be classed as an evening of impersonations and probably all the better for it. Think of the classic 80’s Kenny Everett TV shows and you have a feel of how impersonations are handled, plus (in true Kenny Everett style) a bouquet of new characters.

‘Randolf Tempest’ is a curiously old school character, considering the '70s-'90s eras of the other representations, himself reminiscent of the likes of Terry-Thomas or Leslie Phillips. After his introductions, we are treated to actors such as Steven Seagal and Christopher Walken and musicians including Neil Diamond and Barry Gibb plus a number of very odd ‘other characters’ who are frequently very funny. ‘Vin Deisels’ takes us through some outrageous power-point images, Big Arm Man presents an interesting take on Super Heroes and the Cirque de Salford is almost beyond description; needing to be actually experienced. Special mention must be made of ‘Rinse’; not exactly a tribute act to Prince but certainly a very memorable performance; for all the wrong reasons.

SOS stands here for ‘Superstars on Stage’ and has been lovingly put together by Peter Slater, Jeff Downs and Boogaloo Fish, who play all the characters. The comedy has a modern feel but the real people depicted are mainly from a '70s and '80s heyday. Even the opening video is based around a standard Quinn Martin intro and you have to have been around in the '70s to fully appreciate this (from the time of ‘Cannon’, ‘Kojak’ and ‘The Rockford files’). In some ways, there is '70s/'80s variety feel to SOS Comedy which is sadly now missing from current Saturday night TV schedules. However, it would be unfair to call this a retro show and the audience, which had some young members born clearly after 1980, was certainly on side, laughing throughout. This is a show which certainly deserves to go further, providing a real variety on non-stop curiosities. A very enjoyable night out.