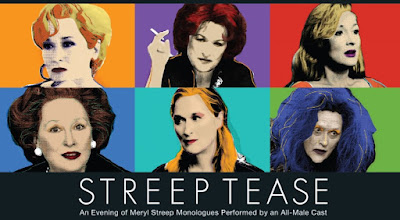 Streep Tease is pretty much what it says on the tin - an evening of Meryl Streep monologues performed by an all-male cast. What started out in Los Angeles in 2009 has made it to Manchester in 2018. It is clear that the cast made up of Paul Antony, Michael Pope, Callum Taylor and Josh Vince all absolutely adore Meryl Streep. And if you are a fan of the Oscar Winner you will have a fantastic evening, but if you’re not so familiar with her body of work then some of the humour in the show may go over your head.

Each actor gets to take on two of Streep’s most iconic pieces including her Academy Award winning performances in The Iron Lady, Sophie’s Choice and Kramer vs Kramer. Although the pieces were written for a female actor each member of the cast puts their own spin on the pieces. However, the standout performance for me was Antony’s interpretation of the Iron Lady - it was powerful but also absolutely hilarious.

On the whole most of the performances were pretty decent. I did notice there was no Director mentioned in the programme, and perhaps there wasn’t one. There were a few things that may have been addressed if a Director was there, in particular in The Devil Wears Prada piece Antony did speak a bit too fast, so some words were lost. The intimacy in Pope’s interpretation of Sophie’s Choice was great but due to a lot of noise coming from outside the building meant I was straining to hear what he was saying. I understand that it is supposed to be a timid and quiet scene but perhaps a bit more volume would have helped, or even positioning himself closer to the audience.

Antony proved himself to be a good host as halfway through the night he hosted a Streep Smart Quiz with members of the audience. It was a fantastic idea to include to audience in the show. It was fun and from this the audience warmed to them more. Whether it was intentional or not I’m not sure, but there seemed to be an error at the beginning of the show when the opening montage played twice. The cast did try to style it out, however because it was such a long clip I think it would have been better to stop it and switch to the correct one.

No evening of Meryl would be complete without a mention of Mamma Mia, and there is not just a mention that can do justice to the finale is a singalong of the classic ‘Dancing Queen’, which was great fun to watch and be a part of.