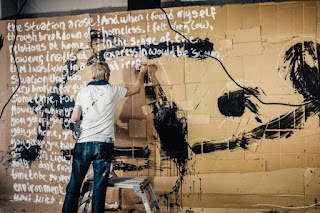 Recorded specifically for MIF17’s award-winning Manchester Street Poem - a live installation artwork that told the stories of people who found themselves homeless in the city - Manchester Street Poem Installation Score is available to buy online now. A track from the collection - Doris - is the latest release in Underworld’s ongoing DRIFT project which sees the band release new music weekly over the course of a year. Hear Doris here.
Created during a process that was both performance and compelling installation, the Manchester Street Poem Installation Score is a unique record of the music underscoring the stories of people who found themselves homeless in the city. During the course of a week Hyde covered the walls of a disused city centre space with words and phrases drawn from the streets, whilst the space was filled with a powerful soundtrack by Rick Smith built on fragments of human voice recorded all over the city.
Manchester Street Poem Installation Score is available to buy exclusively from underworldlive.com. Proceeds from download sales will go towards funding the ongoing activities of Manchester Street Poem ahead of its return to this year’s Manchester International Festival (4-21 July 2019).
Over the past two years, the Manchester Street Poem team have continued to work with Manchester International Festival and pioneering local organisations including Mustard Tree and the Manchester Homelessness Partnership to develop the project.
This year Manchester Street Poem returns in a new incarnation to the very heart of the Festival, with a daily-changing exhibition in Festival Square – MIF’s takeover of the city’s Albert Square which also features free live music, cabaret, DJs, and special events.
The billboard-sized artworks will be created each day at a temporary city centre workshop by Karl Hyde and the Manchester Street Poem team. Visitors will be able to scan a QR code on the artworks which will enable them to listen directly to the contributor’s voices, newly recorded for this project. Members of the team will also be available on the square to answer questions and engage in conversations about the work they do throughout the year. It will also be possible to watch the creative process in action at their city centre workshop which is open daily (8-21 July).
Karl Hyde says: “The experience of taking part in MIF17’s Manchester Street Poem performed installation was both euphoric and humbling, something that will remain with all of us involved in the project forever. In the two years since, we have rolled out a series of monthly workshops, continuing to collect new stories and drawing in the wider community. This year, we’re filling an even bigger canvas, publishing fresh stories daily, as billboard size broadsheets, right at the heart of Festival Square. This is a project that we will continue to evolve for as long as there are stories that need to be told and voices that remain unheard.”
Manchester Street Poem will be at Festival Square from 9-21 July. The works will be created at Old Bauer Millett arches, 8 Albion St, Manchester M1 5LN, 12-8pm. Admission is free.
at June 15, 2019