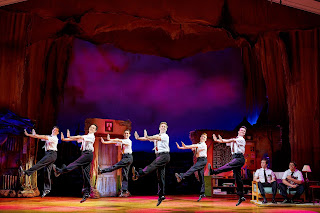 It is a very rare thing indeed for me to come away from a contemporary Musical wanting to book to go and see it all again the following night. It is also extremely rare that any show can and will live up to all the hype and 5-star glowing reviews which precede its opening. In both cases The Book Of Mormon is that rare entity, and it didn't just live up to the hype, it exceeded it!

It is much eaasier to find a sad or tragic theme to write a musical on, as the collective sympathy of an audience is easier garnered that way. Finding a subject or comedy style that can collectively push a whole audience's funny-switch night after night is a much more precarious and edgier road to take - especially when dealing with the somewhat taboo subject of religion. Few have managed to travel this path successfully, but accomplished writing partnership Trey Parker, Robert Lopez and Matt Stone - none of whom are fledglings in their field - have created a show which simply captivates from start to finish in its bold irreverance but huge heart.

This is, actually, a very difficult review to write. I much prefer having something critical to say about a show, rather than having nothing to say other than making a long list of positive superlatives. Everything about this show - and I knew absolutely nothing about it prior to my attending this evening - was absolutely superbly crafted. From a wonderful and slick set (Scott Pask), a superb lighting design (Brian MacDervitt), brilliant and realistic costumes (Ann Roth), to a superb live band under the leadership of Colm O'Regan all came together to aid and ameliorate the hilarious story, along with the bold and brash directing (Casey Nicholaw and Trey Parker), and of course the superb casting of all-singing, all-dancing, all-American (or Ugandan) Muscial Theatre perfromers. [choreography by Casey Nicholaw]

This is a musical which will undoubtedly stand the test of time, and we will be lauding this show as one of the greats in years to come, in the way we look at Carousel, Showboat etc now, I feel sure.  It's appeal is universal; and although it certainly does lampoon religion, especially the Mormon faith, it does so, so self-effacingly and we all know that we are only "taking the Mickey"; and of course there is a very positive and heart-warming end to the story too. Yes it's brash, yes it's gaudy, yes it's down right silly, and yes it is VERY rude [18+ advisory for audience], but it is also one of the slickest, funniest, and most professionally produced shows I have seen, ever. It is not often I am able to put away my notebook and watch the show without having to think about making notes, but you know that if that is the case, the show is a sure-fire hit! It is not often I applaud individual songs, preferring to watch the show uninterrupted and applaud once at the end; however I was clapping loudly after EVERY song, wanting more!

All the cast are absolutely superb, and I simply cannot credit all. Obviously the two young Elders who carry the show, Elder Price (Kevin Clay) and Elder Cunningham (Conner Peirson) are nothing short of magical, and their on-stage chemistry is just fabulous. It was a joy to watch them. A special mention though also needs to be made to the leader of the Ugandan District Mission, Elder McKinley (Will Hawksworth) whose characterisation trod a very fine line between heterosexual and 'coming out of the closet' with rare aplomb, and he made that character his own. Stunning. Other strong noteworthy performances came from both Nabulungi (Nicole-Lily Baisden) - who was called something every time more comedic each entrance almost as if this were pantomime - the love interest and turning point of the storyline, and her father Mafala Hatimbi (Ewen Cummins) who managed to stay just on the acceptable side of caricature the whole time, making his character both symapthetic and hilarious.

The Musical is not for the easily offended, that much is clear, but it is hard to imagine anyone being offended by this to be honest; it's a weird Mormon cross between 'Spamalot' and 'Nunsense', and, as Kenny Everett would undoubtedly have said, "it's all in the best possible taste!"

So shrug and say 'hasa diga eebowai', then put on your best smile and say, 'Hello' to Mormons! You'll love it - I did!