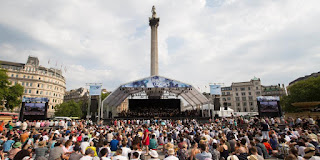 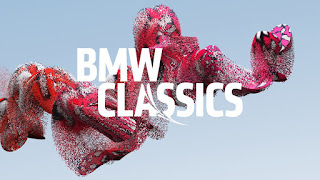 There is something rather strange but also magical to be able to sit in front of a computer screen in Manchester watching an open-air music concert being performed live in London. The BMW Classics  (since these concerts are sponsored by BMW) have become a regular and very welcome part of a summer in London. And what is even more remarkable in this day and age is that the concert is completely free. Anyone living within easy reach of Trafalgar Square should have no excuse at all, and even people like myself or others in countries far and wide can still enjoy the magic - albeit slighly less authentically.

The London Symphony Orchestra is one of the country's most well respected orchestras and for good reason. And this afternoon's concert did nothing but augment that reputation. Conducted by the forever youthful Simon Rattle, whose passion and commitment are omnipresent and abundant along with his obvious talent for coaxing the absolute best out of his musicians - even when faced with a very hot and sticky Sunday afternoon in the open-air, the pieces - even when played through the computer's somewhat minimalist sound equipment, sounded marvellous, and one could only imagine what they truly must have sounded like if I'd have been there to experience it in person.

The afternoon's programme was a sandwich of well-known and popular crowd-pleasers with a new work in the middle. Starting with a selection of Antonin Dvorak's Slavonic Dances, and finishing with a couple of movements from Poulenc's, 'Les Biches' and Ravel's showpiece 'La Valse', these were bound to please most people, even those who might have been completely new to classical music or concerts, and since this event was open to anyone, even passers-by, these were good and solid choices. That is not to belittle the pieces or their composers in any way, on the contrary, it proves their popularity and therefore their skill and beauty of composition.

The piece that the orchestra perhaps gambled a little with was a new composition from contemporary Lebanese composer Bushra El-Turk who has been named as one of of the BBC's top 100 most inspiring women of today. The piece was a special commission and was written especially to incorporate members of youth and children's ensembles. This afternoon members of The LSO's own 'On Track' Youth programme as well as musicians form The Guildhall School played alongside the adult LSO orchestra. This was a gamble, but one that paid its dividends many times over. I knew nothing of El-Turk's music or style beforehand, but for contemporary composers this piece was able to hold my interest and I actually found it quite enjoyable. - as you can probably tell, I am really rather sceptical when it comes to contemporary classical composition. Here El-Turk employed many traditional rhythms and melodies, with heavy use of percussion as the piece built from a very quiet almost prayer-like sound, to a huge crescendo. The instruments were also used in interesting ways.. such as hitting the wooden part of a string instrument, slapping the strings with your hand, or indeed taking the reed away from the woodwind instrument and blowing through just the reed alone. Simon Rattle asked the audience not to applaud until he turned and the whole orchestra bowed. This was because the final part of the piece, called 'Tuqus' - which means 'Ritual' in Arabic and receiving its world premiere this afternoon - required each orchestra member to stand individually and bow as the other members were playing a haunting, ghostly quiet screech. Only when all the orchestra were standing and no-one was playing did the piece actually finish. It was an interesting idea, and quite visually powerful, as indeed this did conform to the piece's title.

The sun continued to shine, and the audience continued to applaud, an so a short encore was required, and for this Rattle chose the final section, 'fugue', of Britten's Young Person's Guide To The Orchestra.

I would have loved to have been among the throng this afternoon in person, but instead took the second best option to relax in the comfort of my own home and listen to this wonderful orchestra and celebrated conductor take me on a glorious musical journey. I thoroughly enjoyed listening to this completely new piece of music, and was more than hapy to listen to and reaquaint myself with old favourites. - I once years ago, when asked, said my favourite composer was Poulenc; more to annoy the asker than anything as he had then to admit to never having heard of Poulenc! He probably isn't my favourite, but he is certainly in the top 10!