NEWS: A high Blood Count this summer at Heaton Park with 25th anniversary production of DRACULA. 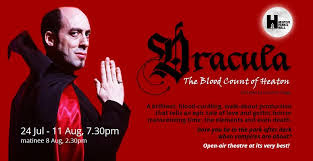 Following their triumphal return to Heaton Park in 2016 Feelgood celebrate their 25th anniversary year with the show their audiences voted ‘most want to see again’ - Dracula – The Blood Count of Heaton from 24th July - 11th August.

Dracula is a brilliant, blood-curdling site-specific spectacle, which will surround audiences in an epic adventure of gothic horror and heart-stopping love that transcends time, the elements and even death.   Last year saw the tragic love story of Romeo and Juliet in the Park and now Feelgood challenge you to walk amidst abandoned coffins and witness flying vampires and creatures of the night rising from their graves!

This contemporary re-imagining of Bram Stoker’s classic tale is fused with hypnotic music, vibrant dance, magic and illusion specially created by Peter Clifford who works with Derren Brown and David Blaine.   We enter the closed Hall for a surprising Manchester reveal and then a stunning cast of Feelgood regulars lead the audience deep into the woods, as night falls.  This is definitely for the bold and adventurous - not the faint of heart!
Feelgood is one of Manchester’s leading independent theatre companies, described as ‘the jewel in Manchester’s theatrical crown’, innovating the profession and serving the community for 25 years.   Their shows, made in Manchester, have toured nationally, to the West End, to Europe and Zimbabwe.  Their first show, 'Our Girls' saw a 1944 US bomber fly into Barton Aerodrome, with the cast on board, who then presented a spectacular immersive musical show in an aircraft hangar.   A quarter of a century on they are still challenging the norm with their true site-specific style and diverse repertoire. Described as mavericks of the imagination they have been presented to HRH the Queen, honoured by the Speaker of The House of Commons, performed in The House of Lords and to over 350,000 audience members, created 32 education programmes, 14 world premières and awarded countless awards, including a High Sheriff Award for Services to the Community.  Feelgood are multi-award winning theatre makers with a sense of risk and adventure.

Caroline Clegg founder of Feelgood Theatre said:
“I am proud to be responsible for Feelgood; a company that prides itself on embracing the pure joy of live theatre and making it accessible to all comers.   I am passionate that theatre should not only touch hearts and minds but when possible make a difference by tackling contemporary issues - at other times simply bringing people together in an incredible setting to be entertained.
Feelgood is very much a family who gather for each show; a team of actors, creatives, technicians, sponsors and funders.  Without them and their lasting encouragement towards our common goal of creating world-class theatre and education work Feelgood would not exist. It is impossible to name all of them here, but I would like to thank those who have been pivotal at some point in our development: PZ Cussons, The Granada Foundation, Manchester Airport, The Stage Door Foundation, Quicks of Old Trafford, the Oglesby Foundation, the Arts Council of England, Ian Tabbron, Manchester City Council and Heaton Park.

Our first show 'Our Girls' in 1994 was intended to be a one-off show but after 18 shows in Heaton Park and now at a quarter of a century old I am delighted that Feelgood are a part of Manchester's cultural heritage and that some of the many thousands of Feelgooders and audience members will come and celebrate with us this summer …just don’t forget to bring your garlic!"

““Congratulations to Feelgood for 25 years of award-winning theatre. By inspiring the next generation through their work in schools, internships and new artistic collaborations, Feelgood are creating a wonderful cultural legacy for Manchester.”

Tickets can be purchased at: www.jumblebee.co.uk/Feelgood2019
In person from Farm Centre Café, Heaton Park
For full information see www.feelgoodtheatre.co.uk
Please wear suitable shoes and clothing (rain does not stop play – no ticket refunds), bring something portable to sit on (blanket, fold up chair), a torch for going home.  No babies or dogs.
You will walk approx. ½ mile; end time approx. 10.15 pm