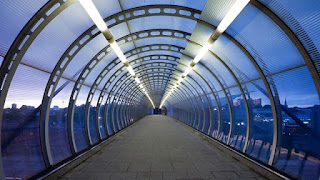 Set in London in the near future, 'The Invisible' is a 90 minute radio drama written by Linda Marshall Griffiths. To use words like Dystopian or Orwellian would not be cliched here, as the nightmarish  vision Griffiths creates of a rich, technology-based, frightened and uber-controlled by a powerful omnipotent state police society of 'elite' living in a safe haven bubble walled off from the plebian masses of poor and undesirables in 'Refugee Settlements' is certainly not a new concept at all, and the way this country and politics are going in general, sadly it doesn't seem like too much of a fantasy either. What's the phrase... what is science fiction today becomes the science fact of tomorrow....?!

The plot surrounds just one family, the Irvings. Tor Irving is an AI expert and living the 'elite' life with her husband Cal and young daughter Wren. She works at the city's main computer and IT centre, Glass Peak, and specialises in AI. She has a 'friend' living with the family at their home, a friend she chooses to call, 'Rose'. We would probably know her better as a few upgrades away from our own 'Alexa' or 'Siri'. They have been granted 'Status Of Ease' and enjoy all the benefits that living inside London's bubble grants. Outside of this though is another world entirely, and one which she knew little or nothing of until she thinks she sees her brother El, who 'left' her 17 years ago and officially classified as 'a displaced person', alive and well, in amongst a large demonstration, and starts looking for him. She eventually does find him, despite the danger, living in amongst the refugees with his non-English wife (the reason for his 'disappearance') and their son and daughter. They have become part of 'The Invisible'.

It is a story of a family divided; a story of loyatly, family, love, and ultimately a fight for what they believe in.  However, in Griffiths' writing there are also so many more undertones too, such as young people demonstrating against unfair control, railing against and the effects of climate change, racism, and a longing for a simpler and more humane world. What is perhaps the most fascinating about this play is the voice given to Rose and her many 'soliloqies'. We listen to the action being played out by the family, but in between times, we are also privy to listen in on Rose's 'thoughts'. AI has progressed in many areas and Tor has been teaching Rose to deconstruct human reaction and body language, and to be able to interact with us more naturally, and yet Rose is still unable to 'feel' and 'emote' or understand the pauses and the things we don't say in our conversations; and in her thoughts bemoans the fact that she is unable to be completely 'human'. An eerie and very too-close-for-comfort wake-up call for all those involved in the study and development of AI..... if you give a machine the means to destroy us, it will.

My concern on listening to this was whether or not a radio play of 90 uninterrupted minutes would be able to sustain my interest. I can asure you it did. Powerful writing, even if the concept wasn't entirely original, together with actors who knew how to use thier vocal skills to the best advantage in bringing the story and their feelings and relationships through using only the medium of the voice, made this a play that I simply had to sit and listen to unflinchingly right to the end.