PODCAST REVIEW: The MancMade Podcast episode 16: 'Mad For It' with Chris Hoyle. 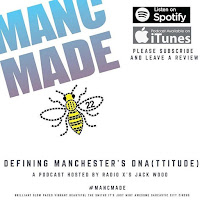 I've been aware for quite a while that the MancMade team had been producing a podcast, but every time I sat down to listen, something else always stopped me from doing so, and it wasn't until this morning that I closed my door, took the phone off the hook,[something that no-one can actually do anymore, but the idiom still applies], and spent half an hour listening to the latest of the MancMade podcast series, 'Mad For It': A chat with actor, writer and proud Mancunian,Chris Hoyle.

The podcasts are presented by the very personable Jack Woods, and although he does seem to be in a  hurry all the time (perhaps because of the podcasts' time restraints) I found this episode to be highly engaging and very easy to listen to. I am not a Mancunian myself, although I have lived here for longer than I have lived anywhere, and when I hear people talking of how proud they are to be a Mancunian and how wonderful this city is etc etc.. I find myself  internally scoffing at them.... out of all the wonderful places in the world to choose, why on earth would anyone stay in rainy, grey and miserable, overcrowded Manchester out of choice??! The longer I do stay here though, the more I realise that Manchester does indeed have much to offer, and is a veritable hub of experiences, cultures and for all its size and spread, it is still quite parochial and friendly. Something which other large cities seem to have lost. And it also true to say that the theatre scene in the city is second only to London, and a lot cheaper and easier to negotiate!

Anyway, back to the podcast and their guest Chris Hoyle. Middleton (North Manchester) born Hoyle is 39 years old and has lived a very colourful and well-publicised life so far, and here he chats very candidly about it all to Woods. His foray into the world of acting came at the tender age of 10 when he was cast as one of three children in a tent in a long-running advert for Dairylea. This was followed by his stint on the famous cobbles as the young son of Mike Baldwin in Coronation Street. He was in Corrie for 2 years, and at the same time juggling school and learning, and growing up far too quickly; earning money, becoming famous, and living it large.

He talks about being caught in possession of cannabis at 13 and how this impacted on his life and his career, coming home one day to find the front page of a daily newspaper with a large photo of his face and a headline which ran, 'Drug Shame Of Street Star at 13'. Of course, his character was faded and eventually cut from Coronation Street. And of attending Oldham Theatre Workshop and of him being accepted to and attending The Webber Douglas Theatrre School in London aged 19.

Before that however, he also tells us of his first serious relationship, with a man 21 years old when he was only 13.  Even at that tender age Hoyle knew he was gay and enjoyed the bars and the company of Manchester's Gay Village

After spending 10 years in London he decided to come back to Manchester and write a play that had been brewing in him for some time. The play became 'The Newspaper Boy', which he originally envisaged as a TV drama, but soon realised that it would work better for the stage, and he talked of his first time staging the play, and both his nerves and excitment at finding out that it had garnered so much press interest. The Newspaper Boy was after all a semi-autobiographical tale of a young boy who stars in a TV Soap Opera and then finds his world turned upside down after being caught with illegal drugs. Hoyle's life-long friend and fellow thespian Suranne Jones asked to play the part of his mother, and so, instead of hiring the tiny basement fringe theatre venue that was Taurus Bar on Canal Street, he had to quickly find a larger venue to accommodate the growing interest and ticket sales. The Deaf Institute was quickly hired, and then, some years later, Hoyle staged a hugely successful and critically acclaimed revival at another Fringe Theate that sadly no longer exists, 53Two.

Hoyle also talked about his love for Manchester and how he feels very much at home here - it is a creative city, and one which has taken him to heart and one which he feels he owes much to. In Manchester, he states, we can make things happen, and there is a community and a support network like no other he has experienced. Mancunians are supposed to be a little crazy.. a little mad, and Chris Hoyle is mad for it!

Each podcast is different as Woods will chat to guests from different walks of life, people who have made or are making an impact on this city that nearly 3 million of us [Greater Manchester] call home. There is bonhomie, light-hearted banter, and each one a serious advert for the greater good and promotion of this surprising and ever-changing city of Manchester. Most definitely worth listening to, whether you are a Mancunian or not!