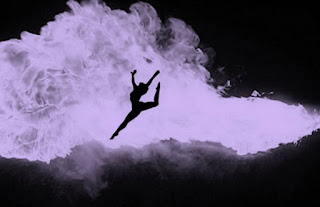 Now in its 11th year, this annual celebration of amateur and community dance groups throughout the Salford borough is one of the highlights of the local dance calendar and has grown in both the number of participants and the quality of dances performed year on year. This is all thanks to the tenacity and vision of the lady who has selflessly been organising this, Karen Acton.

With their "every child deserves the limelight" motto, the event now covers three days and sees 34 groups, from primary school after-school clubs to private dancing academies to adult community care / support groups, all doing just that and having their time in the spotlight.

I was there this evening (Monday) for the first of the three evenings, and, as in previous years, the whole event was compered by the personable David Smith, and musical entertainment was provided for by Johnny Turner, looking decidedly more mature this year.

Turner played two songs before the interval, and then another before the 'thank yous' at the end of the evening. His choice of solo guitar songs, which I am assuming were self-composed, were good, and in the first of these particularly, he seemed to be channeling what has now become known as 'the Manchester sound' from the many famous Manchester groups that have been in the last few decades. However, the final song of act one was a very poor choice sadly as he simply did not have the vocal capacity / expertise to be able to cope with it. Shame.

To start the second act, a rather nervous-looking 16 year old came on to sing 'Empty Chairs At Empty Tables' from Les Miserables. Considering this was the first time he had ever sung in public, he coped very well, and had a surprisingly sonorously deep voice for his tender years.

However, to the dancing....

Starting the first half this evening was a group of excellent dancers from Reflections Dance Company (Boothstown). Dressed in co-ordinating psychadelic t-shirts, this modern hip-hop and streetdance styled choreography was superbly realised and proved to be a superb start to the evening.  After this came two smaller groups from Sandhams Dance Studios (Farnworth). Last year the first of these groups travelled to Spain to enter the Dance World Cup, and came away with a silver medal. Watching them this evening it was abundantly clear why. 5 girls in matching blue and gold sparkly costumes made their acrobatic and gymnastic slow dance seem effortless and so graceful. What must obviously have taken years of training to perfect, these 5 worked together with seeming ease and utter precision, and completely captivated me with this piece of contemporary ballet. Absolutely stunning. After this, and from the same school, came a younger group, again dressed in sparkly leotards of differing designs, and again performing a contemporary piece heavily influenced by acrobatics and gymnastics. The leaps and the timings were again exceptional. We were told that this year both of these groups will be travelling to Portugal to compete in this year's Dance World Cup. I wish them both the absolute best of luck, and if they don't bring home a medal then I will be wanting to know why!!

After this a complete change of pace and mood was needed, and so we welcomed 24 members of the TRU Dance And Drama Group [Transitional Rehabilitation Unit]. This is an organisation which works with individuals who have suffered brain damage, helping them back into the community through rehabilitation programmes and dedicated trained nursing support. This evening this group performed an Abba Medley, and it was not only heartwarming to watch them perform, but equally so was the positive reaction and applause they received at the end.

After this came The Abigail Bibby School Of Dancing (Tyldesley), and their first time at SDE.  Starting with a huge human pyramid this was a team who used many cheerleading moves and lifts in their routine and indeed some of the lifts were very exciting. I enjoyed the pictures these girls created.  Another group from Sandhams Dance Studios came on next. The group had an average age of 7 and showed us a whole lot of sass and attitude. For such young dancers, they had remarkable poise and rhythm, especially the little one who seemed to hog centre stage during the routine! The last dancing group before the interval came again from Reflections. With a  '60s vibe these 7 girls tapped their way cleverly through a piece of music that didn't lend itself to the tap dance genre at all, and so it is huge credit to these girls for finding their way through with such ease.

All the dance groups after the interval were from after-school classes from local Primary Schools. First was Irlam Endowed with a Lion King medley. Some nice ideas here, but most unfortunately one of the girls was having trouble with her cloak getting in her way. The Cathedral School of Saints Peter And John (Salford) came next with their Tribute To Will Smith. This dance was a sure-fire hit, as the choreographer had managed to inject much humour into the routine to the obvious delight of both performers and audience. A cheeky young chappy starting the whole dance off nicely and setting the tone superbly. Delightful.

A group of 6 - 8 year olds came next with a nice choroegraphy and good movements from Moorside Primary (Swinton). This was followed by St. Mark's Primary (Worsley) with a choreography that would have worked much better had we not been bombarded by the distractions of rather unnecessary advertsing of their school on the large screen behind the dancers. The group with the youngest dancers was saved until last, with two of the 7 girls on stage being only 5 years old.  This was St. Charles' Primary (Swinton), with another Cheerleader-style routine which ended the evening very nicely.

Tuesday and Wednesday sees a similar format but with completely different groups. What a wonderful idea, this coming-together of groups and schools, and being able to watch and collaborate with each other in such a non-competitive environment. A great evening, and I hope the next two will be just as good.