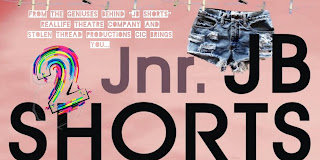 After their highly successful Junior J B Shorts as part of last year's G M Fringe Feestival performing at The International Anthony Burgess Foundation, the team have brought another evening of 6 short plays performed by up-coming youth talent to the Manchester stages.

The institution that is J B Shorts is a well-known and much loved part of the Greater Manchester fringe theatre calendar, and now it seems that the adults may well have some very worthy competiton, as the junior branch looks like also being an annual event.

The actors all come from one of two youth training schools at the moment, A Will And A Way Acting School based at The Way Theatre in Atherton and The Little Big Theatre Workshop in Urmston., whilst the producing is a collaboration between Realife Theatre Company and Stolen Thread Productions.

The Jnr version takes the same format as its elder counterpart, and we are presented with 6 20-minute plays which use minimal staging and props. Interestingly three were new to me, and three I had already seen performed at least once before.

The play started with a very interesting and arresting piece (pun intended) by Trevor Suthers, 'No Comment', which for the first third of the play I was beginning to get rather angry with the director for the incorrect setting / placing of a police interview - and then, although a little before the suspect, the penny dropped. A very cleverly written and directed piece of thriller-esque theatre. This was followed by Peter Kerry's 'Zero's And One's', a humour-laden study of a husband and father being driven mad by our greed and need of technology, and then the first half finished with another Trevor Suthers' play, and the first of the evening's offerings I had previously seen, as three modern-day witches bemoan the losing of their cultural identity and pay lip-service to their 'customer' Macmeth in a clever mickey-take of the main themes from MacBeth.

The clever and witty study of marital stife as seen through the eyes of the adult as a child as an adult, 'Playmates', opened the second half. Again a Suthers piece and I really enjoyed watching this again.
This was followed with a humorous piece about a local championship Scrabble tournament and a very sore loser and his 'relationship' with both nerdy newcomer and his ex-girlfriend now arbiter, in the rather clever pun of a titled, 'Qixotry' by Lindsey Williams. Then, to finish, came Dave Simpson's beautifully observed study of nerdy and innocent first love in ' Blind Date 2'. A super choice to bring an evening of excellent acting, directing and writing to a close.

I have deliberately not, as yet, mentioned any of the actors. This is because they were all excellent and along with some very sensitive and sensible directing, managed to find some truly lovely characters both real when necessary and creative and OTT when required. I do believe the standard of acting to have been generally higher this year than last, and all the cast were well chosen and credible. One young actress stood out though perhaps just a little more than the others; playing two characters at either end of the evening which were as far removed from each other as chalk is to cheese, proving not only her talent but also her versatility. This was Evie Healiss who played a young child-abducting suspect in the first play, only to watch her beautifully nuanced portrayal of a novice blind date nerd in the final piece. Ben Whittle also deserves high praise for his role as matching nerd in the final piece, again superbly created and hugely sympathetic, but I was a little less convinced of his bad cop role in the first. Although I will iterate that all the actors were deserving of much praise this evening, but since subjectivity is bound to play a large part in which ones I liked more than others, it would be unfair to single any more out.

Jnr J B Shorts performs for 2 nights at their 'home base' of The Way Theatre in Atherton tonight and tomorrow, so if you are able to, I strongly recommend you go and watch these actors and actresses at the very start of their professional journeys. You will not be disappointed.