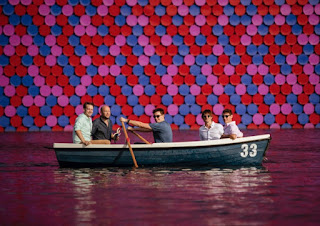 THE LEISURE SOCIETY are heading back out on the road in September, promoting their new album “Arrivals & Departures”.
After a sensational set of shows throughout the UK in May, the band will embark on another run of gigs between 17th and 28th September.
‘Arrivals & Departures’ Tour
17th - Manchester, Night & Day (in aid of Big Issue North)
18th - Belfast, Duke of Yorks
19th - Dublin, Whelans (Upstairs)
20th - Oxford, Bullingdon
21st - Grayshott, Grayshott Folk Club
22nd - Southampton, Joiners
24th - Milton Keynes, The Stables
25th - Newcastle, The Cluny
26th - Birmingham, Hare & Hounds
27th - Sheffield, Leadmill
28th - Liverpool, Leaf
Watch the video for latest single 'A Bird, A Bee, Humanity' here: https://youtu.be/M3iwgDTq4mw
During the promotion of the band’s previous LP, The Fine Art of Hanging On, Nick and the band's flautist Helen Whitaker went through a long process of separation, ultimately resulting in Nick moving out of their Brighton home.
This displacement set the tone for the next 18 months, as Nick moved from one temporary accommodation to the next, writing and recording demos constantly as he came to terms with the break up - which would eventually become the foundation of their upcoming double-album, Arrivals & Departures.
Released on April 12th 2019, the album was recorded in rented and borrowed houses in the Peak District, the Cotswolds and a medieval mansion in Richelieu, France. The band also snuck into Union Chapel in Islington late at night to capture strings and choral sections for the record, which features the likes of Brian Eno and poet Liz Berry, and was mixed by Gareth Jones (known for his work with Grizzly Bear, Nick Cave, and These New Puritans) – and Paul Gregory (Lanterns On The Lake).
More about The Leisure Society - and Arrivals & Departures:
Nick Hemming grew up in Burton-on-Trent. The Leisure Society was born when Nick decided to share a London flat with fellow Burton-on-Trent exile and multi- instrumentalist / producer, Christian Hardy.
The years following that initial meet have seen the band release 4 critically acclaimed albums. Touring extensively throughout, the The Leisure Society have recorded with Ray Davies and were subsequently asked to play at his Meltdown Festival. They packed a tent at Glastonbury. Brian Eno declared himself a fan, and the band have been nominated for two Ivor Novello awards. The band also provided the decisive musical ending to Paddy Considine’s BAFTA winning directorial debut Tyrannosaur, and were invited to perform live with The Heritage Orchestra at a sold out Barbican.
In 2016, the band was derailed by the break-up of Nick and long-term partner, flautist Helen Whitaker. Retreating to their roots, Nick and Christian left the UK to tour Europe as a duo, then another 3 weeks touring Italy with violinist Mike Siddell in tow. New songs emerged throughout this period and developed in intimate venues, hotel rooms and moonlit courtyards.
In 2017, the band’s album delivery deadline loomed, but rather than rush out a new record, they decided to dedicate another 12 months perfecting it in studios and rented houses across the UK and France. Arrivals & Departures is their most ambitious and diverse record to date, charting the journey from heartbreak, to anger, to hope, in 57 lavish minutes.