NEWS: Chester Music Festival arrives at The Storyhouse next month. 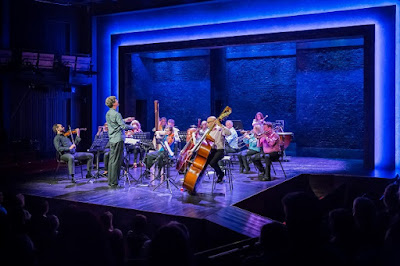 Storyhouse will be filled with magnificent melodies this summer as the hugely popular Chester Music Festival returns.
This year’s festival, taking place between 20 July and 4 August, features an impressive line-up of international virtuosos and exciting young talent who will perform in spaces across the building.
There will be stellar appearances from Supertramp superstar John Helliwell, leading jazz exponents Julian Joseph and Gwilym Simcock, award-winning classical crossover cellist Abel Selaocoe, and Cheshire-raised virtuoso pianist Martin Roscoe.
The packed programme also includes a Big Band evening, Company Carpi’s stunning dance theatre performance piece The Stumbling Block, a series of classical recitals, the Storyhouse Jam Along – where the community are invited to come together and make some music and the return of the popular Kitchen Prom and Caffé Venezia events. There will also be 12 family-friendly free daytime concerts by new musicians.
Bulgarian-born, British-based Dobrinka Tabakova is this year’s festival composer-in-residence, and her luminous compositions will be showcased in a number of concerts including a major performance by Ensemble Deva and Chester Festival Chorus. She will also take part in a special ‘In Conversation’ event with festival director Clark Rundell.
The festival opens on 20 July with Chester Festival Chorus performing with Ensemble Deva.
On Saturday 27 July Supertramp saxophonist John Helliwell will be joined by award-winning composer Andy Scott and the Ensemble Deva String Quartet to present the world premiere of When I Was Young, celebrating his 75th year in super style.
And on Sunday 28 July there will be a Young Takeover of the venue curated by Storyhouse’s own award-winning Young Storyhouse team.
There will also be three special screenings of some of the world’s best-loved operas, broadcast direct from the world-famous Glyndebourne opera house.
And the festival reaches a crescendo on Sunday 4 August when musicians of all ages and abilities will be invited to take part in The Big Storyhouse Jam Along. The event is an opportunity for people to join together and make some joyous music in an informal setting.
Storyhouse Artistic Director Alex Clifton said: “Chester Music Festival has become a much-loved and hotly-anticipated part of summer in the city, and we’re incredibly proud of the programme that has been drawn together for this year’s event.
“Our concerts will present classical music in new ways, and in unexpected spaces throughout Storyhouse. This is relaxed, informal music-making from a new generation of world-class musicians and composers who promise to bring energy and excitement to both classical favourites and some lesser known, but amazing, pieces.
“Alongside the stars of the future we’re also delighted to welcome back some fantastic classical musicians who are at the pinnacle of their careers, along with festival favourites like John Helliwell and our own hugely talented Ensemble Deva.”
The Chester Music Festival has been produced and organised by Storyhouse and featuring Ensemble Deva since 2013. The Chester Summer Music Festival, a volunteer-led event took place annually in venues across the city for more than 20 years. This is the third year the current festival has been staged at Storyhouse.