AMATEUR THEATRE REVIEW: A Night At The Musicals - The Waterside Theatre, Manchester. 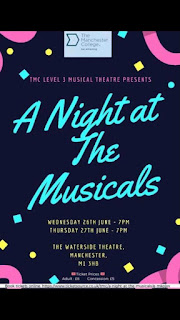 Young students between the ages of 16 and 18 studying Musical Theatre at The Manchester College took to the stage this evening at their own Waterside Theatre to perform a showcase of excerpts from popular musicals in the form of short scenes, songs and of course dances.

A large group of hard-working and talented teenagers - sadly without a programme that's the best explanation I can proffer - acted, sang and danced their way through several Musicals this evening, and although it was obvious that some had been given much more to do than others, the general feeling of ensemble and creative togetherness was palpable. The chorus songs and singing were of a very high standard and I enjoyed listening to their choral sounds. The dancing too, was generally extremely good, with some of the choreography being technically quite difficult but exectued extremely well. Ful credit to whoever choregraphed these routines.

Some thought had been given to costumes, and although mostly quite basic, they all did work in context with none looking out of place. It was the lighting this evening which concerned me the most. Soloists were given spotlights with insufficient cover creating blackspots and shadows, whilst roving colours bathed the audience at one point leaving the poor chorus in darkness. There were some very odd choices of lighting design, and overall I found it rather distracting. This also went for the directing too. A large raised podium with steps either side had been erected at the rear of the stage, and for their first item, 'Anything Goes' this worked excellently as the bow of a ship. However, after that, it seemed to be used quite arbitrarily even when there was no need to use it, and the actors / singers walked up and down it obviously because they had been given the direction to do so, but without reason or motivation. Strange.

For the entire evening backing tracks had been used as far as I could tell. Some more successfully than others. But I must praise every single company member highly since there was no conductor, no playback monitor (at least not visible) and they all managed to keep in time with the music... which is not normal.. it should be the other way round, where the music keeps in time with the perforner.. and so, well done all!

I enjoyed the whole evening, and again was very pleased that the cast morphed so easily between musical theatre genres and styles. The standard impressed me overall, but - yes, this is a purely personal and subjective decision - here are the numbers which I thought worked and I enjoyed the best.. 'Luck Be A Lady' from Guys And Dolls; The Dance At The Gym from West Side Story, and 'No Day But Today' from Rent. A special mention to the girl with a beautiful powerhouse of a voice who sang the solo 'The Wizard And I' from Wicked.. that simply blew me away! And I was extremely pleased to see and hear the original 'Mungojerry And Rumpleteezer' from Cats, and not the absolutely awful newer song which seems to have replaced it.

Thanks to all for a very entertaining evening, and I look forward to seeing your next production in the Autumn.