INTERVIEW: As Mavis Staples commences her European Tour - listen to her story here! 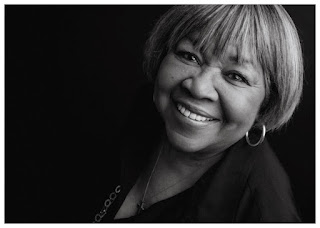 Although Mavis turns 80 next month, the legendary vocalist shows no sign of slowing down. 'We Get By', Staples' 12th studio album, features songs written and produced by multi-Grammy award-winner Ben Harper.
“When I first started reading the lyrics Ben wrote for me, I said to myself, ‘My God, he’s saying everything that needs to be said right now,’” Staples remembers. “But the songs were also true to my journey and the stories I’ve been singing all my life. There’s a spirituality and an honesty to Ben’s writing that took me back to church.”
Hailed by NPR as “one of America’s defining voices of freedom and peace,” Staples is the kind of once-in-a-generation artist whose impact on music and culture would be difficult to overstate. She’s both a Blues and a Rock and Roll Hall of Famer; a civil rights icon; a GRAMMY Award-winner; a chart-topping soul/gospel/R&B pioneer; a National Arts Awards Lifetime Achievement recipient; and a Kennedy Center honouree. She marched with Dr. Martin Luther King, Jr., performed at John F. Kennedy’s inauguration and sang in Barack Obama’s White House. At a time when most artists begin to wind down, Staples ramped things up, releasing a trio of critically acclaimed albums in her 70’s with Wilco’s Jeff Tweedy that prompted Pitchfork to rave that “her voice has only gained texture and power over the years” and People to proclaim that she “provides the comfort of a higher power.”

“I come from a family of Mavis fans,” explains Harper, “so her music has been woven into the fabric of my life from the very start. When I got the call for this gig, it felt like my entire career, everything I’d ever written, had been pre-production for this.”

Mavis recently held three immensely celebratory 80th birthday shows this month at New York City’s Apollo Theater, Nashville’s Ryman Auditorium and LA’s Theatre at the Ace Hotel. “Couples embraced and held hands as if caught up in the warmth and spirit of a singer who never failed to hug her many guest performers,” the Associated Press said of the Apollo show.
Mavis Staples returns to Europe this weekend to perform shows in support of her new album 'We Get By'. The tour starts in Dublin on Sunday before heading to the UK where Mavis will appear at Glastonbury Festival, The Forum in Bath and London's Roundhouse. Mavis recently chatted with Marc Maron for his celebrated podcast WTF with Marc Maron about growing up in Chicago, early performances with her family’s band the Staple Singers and working with Martin Luther King Jr. and Bob Dylan.
Listen to their in-depth conversation HERE.
JUNE