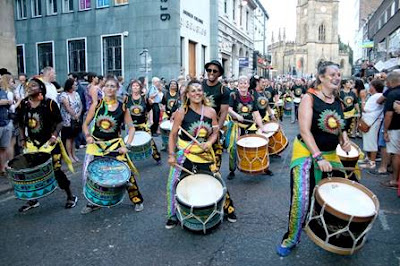 THE BRAZILIAN BEATS WILL BE HEARD ACROSS LIVERPOOL THIS SUMMER
BRAZILICA ANOUNCE PARADE BANDS AND MUSIC LINE-UP
Organisers of Brazilica Festival, one of Liverpool’s most eagerly anticipated events of the year, today announce the festival music line-up and bands performing in this year’s parade.
Liverpool’s International Samba Carnival returns to the city in July with the main carnival day taking place on Saturday 13 July in what is now Brazilica’s 12th consecutive year.
As ever the Brazilica parade remains the highlight of the festival and this year an impressive 19 bands from all over the UK and Europe are taking part in the night-time procession on Saturday 13 July.
The 2019 line-up includes: ABC Dance; Arco Iris; Batala Mersey; Baque de Axe and Baque de Ogum; Beat Life; Cork City Samba; Karamba; Katumba; Liverpool Samba School with Samba Livre dancers; Manchester School of Samba; Oba!tuQ; Oya Batucada; Paraiso; Samba Espirito; Samba Funk Factory; Sambafriq; Unidos do Ritmo with percussionists and dancers from Leeds, Huddersfield and Brighton; Wirral School of Samba; and Worldwise Samba drummers and Preston dancers.
Previous years have seen the Brazilica parade attract in excess of 35,000 people, with crowds lining the streets along the route as it made its way from Abercrombie Square through the city centre streets.
This year’s parade route will be announced in due course.
There will be plenty to whet audience’s appetite for 2019 including live samba bands taking to the stage in the Fan Park located inChavasse Park in Liverpool ONE which will be hosting the Vitality Netball World Cup this summer. The Fan Park has been organised and programmed by Liverpool City Council.
Samba Funk Factory will open the festival, with a performance on Friday 12 July from 1pm at Fan Park. The 25-strong French batucada percussion band will be performing original compositions spanning rock, reggae, samba, Bollywood.
The music continues across the weekend, with Oba! TuQ from Paris performing at Fan Park on Saturday 13 July from 2pm. The 40 percussionists and dancers will have the crowds dancing in the street as they bring their sizzling selection of samba.
Festival-goers can samba until the early hours at the official Brazilica After Party taking place at Camp and Furnace on Sat 13 July from10pm – 4am which will feature carnival DJ’s and live music. Entry £5. Book tickets at www.skiddle.com
Keep the party going on Sunday 14 July; head to Church Street in the city centre as samba bands will be performing throughout the afternoon. Visit www.brazilica.co.uk for times and performance information.
Maeve Morris of Liverpool Carnival Company said: “We have an exciting mix of bands travelling to Liverpool from all over the UK and Europe to perform in this year’s Brazilica festival. We cannot wait to welcome them to the city for what promises to be the best parade and festival to date!”
Sarah Vasey, Fan Park Programme Manager, said “We’re happy to be working with Brazilica to host 2 of their bands in the VNWC Fan Park and are sure it’ll add a real festival atmosphere to the weekend and hope the netball fans in the city will party on with Brazilica into the night!”
Full programme details to be announced soon.
To get involved in Brazilica Festival 2019 as a media partner, sponsor or volunteer please contact carnivalcompany@aol.com

Watch Brazilica 2018 highlights here: https://vimeo.com/283309411
Keep up to date with all Brazilica Festival activity at:
www.brazilica.co.uk