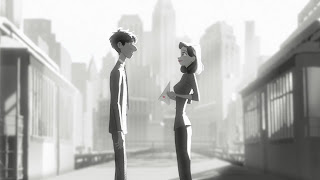 For those who know me, they will know that cartoons are most definitely not my thing. I never really liked them as a child, except perhaps for an occasional foray into Tom And Jerry or Bugs Bunny, but mostly, cartoons were simply not for me, and even now as an adult, stay well away from anything which uses animation. CGI has advanced to such a level nowadays that it renders the original style of cartoon almost completely obsolete in any case.

My knowledge of how cartoons are made these days is, at best, guess-work, and so, whether or not this little gem of an animated film I stumbled upon on Youtube this morning is a cartoon in the traditional sense or  not, I have no idea. What I do know however, is that it is simply wonderful, and something I would not have expected to come from a studio renowned for churning out saccharine and cute children's films both animated and real. Admittedly it is a very 'sweet' film, but it is a much more adult take, and has no little bunny rabbits or butterflies to detract.

Called simply 'Paperman' and lasting just over 7 minutes, it tells the story of a young single male office worker who has a chance encounter with an equally young and single female on a station platform. There is an instant connection between them, but she boards her train and looks wistfully back at him forlorn and alone on the platform. Later that day whilst at his office he sees the same young lady again in the building opposite and so uses countless reams of paper making paper aeroplanes to try and fly one through her open window in order to alert her to his presence again. Every conceivable contrivance stands in his way however, and so the aeroplanes themselves conspire to help them in their destiny.

The entire film is without dialogue, and filmed in black and white, except for the red lipstick kiss left on one of the pieces of paper.  [I wonder if this beautiful idea was "stolen" from Schindler's List?] - but as a motif it works superbly. The story was written by Clio Chiang and Kendelle Hoyer and the film was directed by John Kahrs for Walt Disney Animation Studios.

It's a lovely little story, and a wonderful feel-good piece of "theatre" that we all really need at the moment in these turblent and uncertain times in which we live. Life and love-affirming, and beautifully crafted. No wonder it won an Oscar for the Best Animated Short!