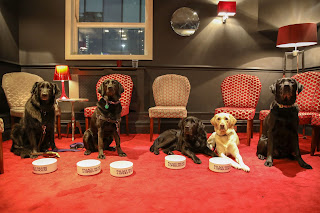 Registered blind individuals were given the opportunity to experience the new musical & Juliet wearing new smart glasses that allowed them to see the entire performance.

Participants with ‘tunnel vision’ also known as ‘peripheral vision loss’ entered a competition to experience the show using new smart glasses technology which allowed them to see the entire musical & Juliet before its West End debut. In addition, a further 10 registered blind winners were given an exclusive touch tour which allowed them to feel the props, costumes and meet the cast - followed by the Opera House’s fantastic audio description accessibility option.

Kevin Crompton, 48 from Manchester who has lost 95% of his vision and describes his remaining sight as “looking through pin hole”, commented on the performance and said: “It was very emotional putting the glasses on for the first time in the theatre, usually I wouldn’t be able to see the stage, but I was able to follow the entire story and see the full stage and all of the characters. Sight loss doesn’t mean having to give up on life, it means doing life differently – this is exactly what OXSIGHT are doing for people.”

The Opera House teamed up with Henshaw’s to make theatre experiences more accessible for those living with a visual impairment and as part of the World Sight Day 2019 campaign, giving free tickets to new musical.

The Opera House also welcomed five guide dogs into the venue’s Ambassador Lounge for the evening, who each received VIP treatment throughout the performance with their very own Palace Theatre and Opera House water bowls, provided by yappy.com.

Theatre Director, Sheena Wrigley commented; “When we were asked to be involved, our answer was a fervent yes. This is an opportunity where we can support developments in accessibility and change how people can experience live entertainment. Working with OXSIGHT means there’s a chance of breaking down barriers and we are committed to making theatre to be accessible to everyone.”

OXSIGHT users have experienced an increased field of view of up to 68 degrees. Many utilise the different modes on offer to enhance their remaining vision and experience sights they thought they had lost forever.

Kirsty Hill from Shrewsbury lost her peripheral vision following a stroke three years ago commented on her experience: “I can’t tell you how much the glasses mean to me, I never thought I would be able to enjoy anything like this properly again. The planning and care that went into looking after all of us and our dogs was so appreciated. The show was an opposite of sensory deprivation, still feel like my hair is standing on end!”

There are more than two million people in the UK living with sight loss that noticeably affects their quality of life. In addition, it is estimated that 250 people start to lose their vision every day.

Hayley Allen, OXSIGHT Customer Care Manager, said: “It’s great to be able to collaborate with Henshaw’s, who do such amazing and important work in supporting the visually impaired. And Opera House Manchester have been brilliant. They’re always working hard to ensure that the visually impaired community feel as welcome as possible.”

This theatre event marks the first of many partnerships that OXSIGHT and Henshaw’s will be seeking out in order to increase accessibility at cultural venues for the visually impaired community.

OXSIGHT is a fast-growing digital eye care technology company established in 2016 as a spinout from Oxford University. It has developed a portfolio of products for the global markets that are transforming the lives of the visually impaired, their friends, colleagues and the community around them.

The Company’s easy-to-use glasses use artificial intelligence and image interpretation software to make a real difference to people with conditions that cause peripheral vision loss. These include Glaucoma, Diabetic Retinopathy, Retinitis Pigmentosa, Myopic Degeneration, Retinopathy of prematurity and other degenerative eye diseases. Its glasses have also helped people with a visual impairment caused following a stroke, such as homonymous hemianopia.

The company has worked in partnership with leading global players from both the visually impaired community and the technology sector. These include Google, The Royal National Institute of Blind People (RNIB), Moorfields Eye Hospital, Guide Dogs Association and The Royal Academy of Engineering.

OXSIGHT is building a network of clinics in the UK and currently has operations in Europe, India and China.

OXSIGHT’s smart glasses use pioneering image interpretation software and artificial intelligence to enhance the remaining sight of people living with peripheral vision loss. The company launched its first products – OXSIGHT Prism and OXSIGHT Crystal – last year and is currently rolling them out around the world.
at October 28, 2019