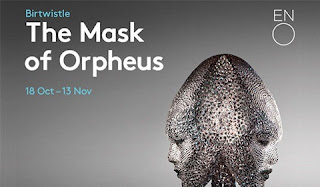 Don’t look back audience in the underworld!

A spectacular, epic, lyric tragedy - an iconic, significant, original work - this composer from the north of England transports the well known Orpheus myth into the late twentieth century.

Orpheus was a legendary musician, poet and prophet in Ancient Greece. He had superhuman musical skills which he used to charm his way into the underworld to try and rescue his new wife who had died after being bitten by a snake. He almost succeeded in this difficult mission. He was allowed to bring his wife back on the condition he did not look back at her on their way out of the underworld , but for whatever reason, at the very end he turned round and lost her for ever.

This piece is complexly scored for massive, untraditional orchestral forces that require two conductors in the pit. There is a combination of percussion, brass, wind instruments, harps that represent Orpheus’ lyre and atmospheric electronic music created in Paris. Beautifully played rich, ritualistic music roams freely with repeated and intertwining themes exploring memory, melancholy, lamentation, time and the nature of music itself.

We are led from inconsolable grief to acceptance and transformation. Orpheus crushing his own skull in the end to erase his memory and silence his mind. The new beautiful mask then appears as featured on the advertisements for this opera.

There is always a busy stage which can sometimes be overwhelming .The mental torment at times is frenzied, nightmarish verging on lunacy with accentuated patterns and symbolism. There are scenes of graphic nature and violence. Dramatic scenes take place inside moving glass boxes; the passing clouds and allegorical flowers. Surreally Orpheus is in an intensive care bed at one point and there are multiple hangings, coffin appearances and a moving graveside episode. Losing love hurts but just keep moving....Different perspectives and extra drama is added by having the three leading characters appear in three different guises.

Peter Hoare as Orpheus the man and Marta Fontanals-Simmons as Eurydice the woman sang their parts with great sensitivity and a hint of magic. The whole cast showed great talent for this contemporary performance.

Visually the colours on the set were exquisite with beautiful lighting and wonderful projections of faces, flowers, leaves, reflections by the bath and terrifying swarms of bees symbolising Aristaeus who desired to be Eurydice’s lover and was the first man to cultivate bees for honey. The bath and bed on stage are used as effective exits to the underworld.

Dance and movement throughout was skillfully performed with long and stunning performances by the aerialists.

The costumes were lavish and fantastic but ranged from solely underpants to the most ornately decorated outfits with Swarovski jewels. Significant were the single bejewelled gloves of Orpheus and Eurydice. Daniel Lismore rightly deserved Vogue’s description as ’England’s most outrageous dresser’.

It was a cruel twist of fate that Orpheus often sailed with Jason and the Argonauts and saved them from danger but was unable to save himself. Orpheus looked back to magical times and also forward to more scientific days; maybe because of this he was a tragic defeated figure.

This production was a celebration of the outrageous and the ultimate feast of opera - a tour-de-force - English National Opera at its best, and part of their series of four Orpheus operas this autumn.Touchingly Harrison Birtwistle was in the audience for this first night and appeared on stage for the curtain call
Reviewer - Judith Armstrong
on - 18/10/19
at October 20, 2019