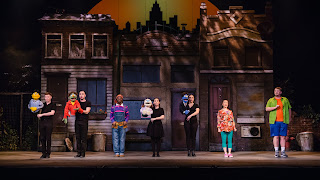 The cult comedy classic 'Avenue Q' has returned to Manchester for just one week. Playing at The Palace Theatre, this puppet-tastic musical is a joyous, highly energetic romp through the often highly sexualised world of after-college life in New York.

Based very heavily on both Sesame Street and The Muppets, the musical has puppets interacting with humans, and all living 'happily' together on the less affordable but decidedly more colourful area down Avenue Q.  Where this musical, in my opinion, falls down in today's terms, is twofold. First, there is a lot of American-specific, and now very old, out-dated referencing. The character of Gary Coleman for example. Gary Coleman was a child star on a hit US sit-com, 'Different Strokes'. However, I doubt anyone under 50 having any knowledge of this in the UK, and so his repartee and 'child-star-now-living-in-poverty' idea simply doesn't have any weight. There are other cultural references too, as well as the whole style of the show being very "off-Broadway", and not a style that has caught on massively in this country. There are other Musicals which fall into this category too, and have had some very limited success over here, such as 'The 25th Annual Putnam County Spelling Bee', but for some reason, perhaps mainly for the themes which this musical addresses, it remains very popular. The second problem with this show is the amount of sex, sexuality, rudeness, lewdness, and basically very questionable content there is within. In one song / long extended section, two puppets are seen naked enjoying loud and orgasmic sex in every single position imaginable, which would be utterly impossible, x-rated, and prohibited if it were to be done by humans; but seemingly watching puppets do this is deemed OK.

The story of Avenue Q surrounds Princeton (a puppet) who comes to live here straight from finishing college. The only place in NYC he can afford. Here he meets with some colouful and (un)desirable residents and neighbours, such as Trecky Monster (a puppet) who spends all day, every day, on the internet watching porn. He falls in love with a kindergarten teaching assistant Kate Monster (yes, another puppet), and then loses it all after he lusts after a sexy nightclub songstress and decides he needs to start searching for his 'purpose' in life. It all ends happily in the end though. A sub-plot involves fellow neighbours Rod and Nicky (again puppets) who finally realise that after being room-mates for such a long time they actually love each other. Real humans living there are Brian and Christmas Eve who provide comedy with their odd romance, wedding, divorce. Humour is to be gained from Christmas Eve being both a bad therapist and Japanese with pidgin English.

The show was a little confusing (perhaps more so than normal) this evening as there were two role changes with Ellis Dackombe stepping in to the role of Brian, and Chloe Gentles took on Mrs. T / The Bad Idea Bear, and Second Arm (for the puppets requiring two people to manipulate). Both did sterling jobs, it just meant that the ensemble this evening was two cast members' light and when the ensemble is only 5 people in any case, it did look rather sparce on stage. The main problem was with the doubling of cast with more than one role. None more so obvious than using Cecily Redman to voice and handle both Kate Monster and Lucy the Slut. When both were on stage at the same time it was rather unfortunately very noticable that the 'handler' was the same person and the voice became disembodied (quite literally).

The cast should be highly commended. It is not an easy musical for an actor. Not only do they have to be triple-threats (and I really enjoyed the choreography this evening), but they also have to handle, voice, and manipulate puppets too, some interacting with them as if they were real, and others (in black) being the 'unseen' puppeteer. However, part of the joy of this production is that we never do 'forget' the puppeteers as they make themselves both physically and vocally as much a part of the puppets as they can by taking on the puppets' characters and caricatures themselves. The direction (Cressida Carre) was slick and snappy, never once missing an opportunity for a rude jesture or crass, lewd pose!

It's a very upbeat show, despite dealing with issues of race, gender, sexuality, homelessness, love, pornography, sex, racism, schadenfreude, alcoholism etc etc... There's a lot of things in there; and all delivered in that very Children's Educational TV programme sort of way, trying to make it all "fun" and "OK".  I have seen the show several times now, but am still of the same opinion; the youth version is much better, and the show should really update, modernise and British-ify, to stay relevant this side of the pond.