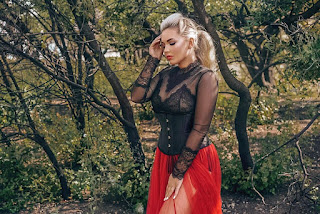 When the invitation to listen to and comment upon this particular artiste came through email and landed in my inbox, I read the first few lines and thought I simply need to listen to this. The lines I read were about her classical music background and growing up in the Opera Houses of Russia. Unfortunately for me though I misinterpreted these lines, as it was her family who had the classical music training and she was just a baby and young girl being dragged around with her mother, a famous violinist, from grand theatre to music palace.

However, this music background and her family's obvious love and talent for classical music must have brushed off somewhere on Phillip, as she now lives in Los Angeles and has a huge online following with her own brand of soul / pop music.

This new song. Thank You Heartbreak, is about fighting and overcoming your demons. She believes strongly in self-empowerment, and as both the lyrics of the song and indeed the film footage both show is that we are stronger than we actually believe ourselves to be at times. The video is shot in a scenic, rural location, and shows the singer as a young girl being chased by her demons / worries, and how she eventually turns around and kills this 'monster'. The final shot is of the young Phillip with the present day one sitting together looking out across a now peaceful and serene landscape. The lyrics saying that we should be thankful for the 'heartbreak' we experience in our lives as it will only ultimately make us stronger and more whole.

Combine this with some rather lush orchestration (in pop music terms) and the music does feel a lot more operatic than much of the music out there of a similar ilk. Phillip does sound very much like many other female singers though, using the throat and nasal areas to produce the voice and resonance rather than bringing the air from deeper, thus losing the fuller and more resonant sound which is usually associated with opera.

Phillip is obviously passionate and you can clearly hear the emotion in her vocals, helped by the swell of musical backing. It's not dramatic in the way Muscial Theatre or opera is, it is still highly contemporary with a soul / pop feel, but is sung from the heart. A singer to look out for in the future for lovers of this genre.