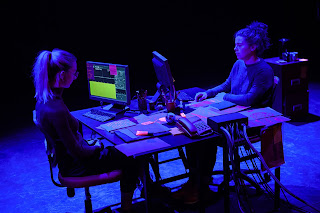 An interesting provenance behind this play...  a group of Sheffield University students meet, they share ideas and, after graduating form their own company, 'Footprint'. This group of energised and talented twenty-somethings have since collaborated with some of the biggest companies in UK theatre, as well as diversifying into film, fashion design and science education! The company always devises each script / project as a team, and that team are Eve Cowley, Immie Davies, Elin Schofield, and Isaac Whiting.

For this particular production, Signals, the team have collaborated with The Cosmic Shambles Network, who themselves are into all things science, the Arts and comedy, but not necessarily in that order!

What we see as the end product therefore, is a culmination of research and hard graft to bring about this 50-minute duologue piece of theatre which despite its claustrophobic design and nature, is a whole lot bigger, perhaps even limitless, in its premise.

Performed by Eve Cowley and Immie Davies, the play covers almost 3 years of quotidian mundanity as the two are assigned to work together on the night shift. Locked togther in a small room and alone in a large building, they have only each other to talk to. Hostile and frosty at first, we see their relationship change over the three years and even their differences and their bickering become a necessary part of their togetherness. They are astronomers, assigned to a station where they routinely scan different galaxies and stars for signs of intellugent life. However, that is also an allegory for these two young ladies, and indeed all of us, as we constantly try to search for meanings and reasons for our own existence and our connection to each other and the world around us.

Using well-placed humour, the 50 minutes flew by. These two actresses were extremely watchable and worked nicely together, there was a real connectivity between them. However, being on the front row of a very small auditorium, and being so close to the set, there were a couple of anomolies. First of all, it was quite clear that the computers they were using - contemporary laptops - were not turned on, and the screens were black the entire time. Second, the cups of tea they had during the show were quite obviously using cold water and the kettle never boiled. The boxes they rooted through to find a particular file were both empty containing ONLY that particular file! And finally, why, since we are in the present day, was it not possible for either of them to use a mobile phone once the land-line cable had been cut? That simply didn't make any sense to me.

However, lack of realism notwithstanding, the performances were very enjoyable, and it was an interesting script posing an interesting question: If you think you have found proof of extra-terrestial life and you have reason to believe that life was communicating with us, what would you do...? What did these two do? Well, you'll have to go and watch the play yourselves to find that out!