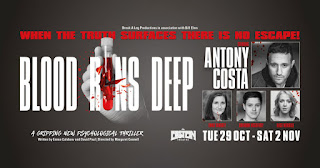 Produced by Break A Leg Productions, 'Blood Runs Deep' is a high standard as there were notable high production values in the show. A lot of expense was put into the set as it looked extremely good and contained several props. Their array of production skills were shone throughout the production of the show.

'Blood Runs Deep' was directed by Margaret Connell, who has done an incredible job bringing this new psychological thriller to life on the stage. Her direction was tight and controlled, but extremely focused. Her dedication and hard workwere clearly evident, whilst watching the show. I really like the way she incorporated all the classic elements of horror such as suspense, edginess and tension into the play.

Emma Culshaw and David Paul, as well as co-producing, also wrote this new psychological thriller. The writing felt genuine and dialogue was very good. I like how the story kept moving swiftly along, but also giving the audience a little piece of the story, so we could attempt to solve the deep, dark family secret, whilst watching the show. There were loads of scary moments in the play, through dialogue and the pauses. The silence worked incredibly well as it kept the audience on the edge on their seats and enhanced the tension between the characters.

The cast of characters included Karen (Emma Vaudrey), Jake (Brandon McCaffery), Greg (Anthony Costa) and Zoe (Alice Merivale). It was nice to see Anthony Costa perform in the play as I haven’t seen him since his days in the boy band, Blue and tv shows, Casualty, Holby City and I’m A Celebrity....Get Me Out of Here. The cast was very small, but this kept the show tighter and more focused on the characters and story. With having such a small cast, the characters could be fully developed and the narractive of the story told fully.

The running theme of 'Blood Runs Deep' was relationships and demonstrated the strain of keeping a deep, dark secret from their loved ones. Plus, this displayed the consequences of what would happen, if the family secret was ever discovered. I particularly liked the concept of having a family at the forefront of the show as most relatives will do anything to protect their loved ones. Blood Runs Deep was a psychological thriller with so many levels of horror incorporated into the play.

The play was set in a house around Halloween in the 1990s, single mother, Karen was on the run with her unsuspecting son, Jake. She was concealing a deep, dark chilling, family secret and was attempting to lead a normal life. At the beginning of the show, Karen was extremely nervous and on the edge, as she was hearing noises and getting nuisance phone calls. She starts thinking that maybe someone knows her secret and was panicking about being discovered. When an unwelcome visitor, Greg, arrived at her home, her suspicions were confirmed, which had devastating consequences for her and Jake.

Jake was in a relationship with his girlfriend, Zoe. Their relationship was quite hostile at times. Karen was overjoyed her son was moving on with his life with Zoe and going to college to study. The chemistry and dynamics between Greg & Karen and Jake & Zoe were very strong and shown incredibly well on the stage. Their relationships became volatile as the story progressed. Additionally, the family secret was putting a strain on the relationships and when it was discovered, this caused a massive amount of tension and discomfort for the characters.

The set design by Laura Murphy was excellent. She has done a brilliant job incorporating a kitchen, a living room and dining room into the layout of the house. I particularly liked there were different areas for the characters to interact with each other. The set fitted into the 1990’s era with the furniture and props such as the VHS tapes. The costumes by Stephanie Stewart and Marina Diamantidi were good and fit into the 1990’s period.

Pete Michelson was the Lighting Designer for Blood Runs Deep and what a great job he did. The contrasts between the lightness and darkness created a mood of tension between the characters and heightened Karen’s suspicions. Even when the set was dark for a particular scene, the audience could see what was going on. Peder B. Helland supplied the music for the show, which fitted so well into the genre of the play. The lighting and music really heightened the tension and enhanced the narractive so much.

The acting was of a very good standard. However, for me personally, Emma Vaudrey’s performance stood out as her portrayal of this damaged and mentally scared character was mesmerising to see. The actors injected pathos into their roles, where the emotions were clearly demonstrated in their performances, through the dialogue and mannerisms of the characters. There was a great deal of friction and conflict, which increased as the family secret was slowly unravelling which intensified as the natractive of the story developed. The pace of the play was very good as each scene added more intrigue and mystery surrounding the story.

On a final note, I really enjoyed seeing Blood Runs Deep and would highly recommend you go and see this new psychological thriller. It had everything you want in a psychological thriller such as love, hate, suspense, tension and horror. Blood Runs Deep kept the audience on the edge of their seats and I really liked the way you could never predict where the direction of the story was going next.