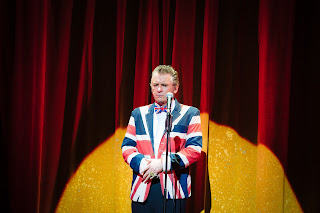 I had never seen the stage play of The Entertainer by John Osborne (the original 'Angry Young Man!'), only the wonderfully bleak film starring Laurence Olivier (who, incidently was the man who asked Osborne to write the play in the first place as a vehicle for himself); so I was very much looking forward to this.

An unusually small audience this Monday evening (not even at one third capacity) was kept waiting half an hour before the start of the play due to some "technical fault", and as the play progressed the numbers dwindled further. A few leaving during the first act, and many more not returning after the interval. Was this just due to the fact that the play was running 30 minutes behind schedule, or was something much more fundemental happening that simply wasn't making this version of the play as watchable as it ought to be...

The play was written in the midst of the Suez Crisis, and pitches political feelings of the time alongside the change in social values as a middle-aged variety entertainer carries on regurgitating his out-dated humour to ever-dwindling audiences. It is a wonderfully prescient socio-political allegory. This "up-dated" version [some dialogue changed to accommodate the new time-frame, as well as the omission of at least one character] sees Archie Rice, the play's 'Entertainer' in the early 1980s, and instead of Suez we have The Falklands, and instead of the 'End Of Pier' style variety act we are shown a comedian unable to compete with the new left-wing  "alternative comedy" which is becoming more and more popular at this time. The only reason I can see for moving the action forward some 30 years and not bringing it up to the present day, (which would make more sense and be more relatable to our modern audiences as our country is going through a huge political and social upheaval currently), is Shane Richie. Richie plays the protagonist Archie Rice, and brings his many years of club and variety entertaining as well as his TV experience to bear in this performance, trying to put his own 'stamp' on the role, shaking off the shackles from the likes of Olivier and Branagh et al. Another decade, required a different Archie Rice! A canny move, and if anyone was going to fill Archie Rice's 1980s incarnation, then who better than Richie?! It was a brave and noteworthy attempt, but for me though, Richie was too self-aware and too angry right from the start leaving his character nowhere to go, and so we were given two hours of self-absorbed, self-indulgent rants and nastiness. The character, as indeed the whole play, was not nuanced enough to bring about enough pity or sympathy from the audience, which seems to be for me at least, a fundamental flaw in the directing / acting of this character.

It also didn't make for a very balanced performanced. It felt very much like 'An Evening With Archie Rice (And Friends)' at times. Despite the valiant attempts at asserting herself, Diana Vickers as daughter Jean, was insignificant, as was Alice Osmanka (understudy and looking too young for the role) as long-suffering and alcoholic wife Phoebe, who sadly droned on ineffectively becoming more and more drunk as the play progressed, seen to be very much an insignificant figure in this adaptation. The always impressive Pip Donaghy as the once great comedy star-turn father Billy Rice, was reduced to doing Alf Garnett impersonations in the first act, but was despite this, the most real, centred, and believable person on the stage. The picture of a fractious family going through socio-political change was there, but it was a seaside comedy cartoon postcard version with little sincerity or depth. Even when tragedy struck, and the unseen son / brother, a 'hero' and casualty of The Falklands Conflict was mourned, the pathos was all too minimal and shallow.

The interior of the Rice's living room was excellently appointed, and looked very authentic but very out-dated, seemingly stuck in the 1970s, perhaps deliberately,  and the war songs used in the play, perfect for the play's original dates, jarred when pitched against the synth sounds of 1980's pop bands during the very long-winded scene changes and the projecting of newspaper headlines. Director Sean O'Connor simply overgilding the lily with these ideas, and lengthening the play unnecessarily.