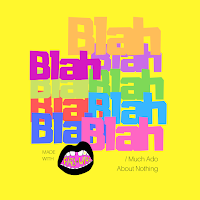 The show's advertising is just as oblique and intriguing in its use of a pseudo Latin (actually meaningless) with the English words "this is a show about nothing don't search for meaning because there is none life is a circle it doesn't have a point" hidden within.  What, then, one might well think, is the point of producing and performing in this show then, or even us as audience coming to watch it? It's a brave gamble in negative advertising. But then we learn that this is a show that has been directed and co-written by a company currently very much in vogue and in demand, the ladies of the hour that are 'Figs In Wigs', and I am no longer surprised, and am now excited. What on earth are the third year students on the Theatre And Performance Degree course at The Arden (Manchester) going to come up with? I have seen many performances by students on this course over the years and have, in equal measure, been delighted, happily astounded, mildly disappointed, sometimes bored, but mostly non-plussed (in a good way!) by what they have created over the years, so eager with anticipation I enter the auditorium!

The open stage revealed two halves of a large pixelated butterfly on either side of the stage, the back wall being used as a screen to project images and film onto. Haze hung in the air and classical music was playing. It starts, very much in contemporary Shakespearean mode, as we hear the 'Sigh No More Ladies' speech from 'Much Ado About Nothing'. What distingushes this speech however is that a young man, dressed in a rainproof orange boiler-suit, an orange wig and drag queen make-up is lounging on a bench miming these words into a microphone whilst the pre-recorded version (in a  female voice) is played through the speakers to us. And if I tell you that that was the most normal thing to happen during this one hour long evocation of  'nothing', then you have some idea just how bizarre, off the wall, but also fun and humorous it was.

The company used TaP's trademark blank poker-face 'the innocent automaton' to excellent effect throughout, as well as taking us on a Mickey-take of 'Countdown', a surreal and spooky dance with horses' heads, and a very clever "remake" of the opening credits of Kenneth Branagh's film of  'Much Ado'.  There were puns a-plenty, and silly dances etc to make you howl with laughter, there was also a rather long mock-macabre section where they all had individual poetic eulogies to the three poor, innocent butterflies found dead in their rehearsal room. (this went on for too long); and every now and again the Shakespeare idea would be thrown into the mix.. a casual mention of the protagonists' names at a strange wedding for example. Foolishly I searched for meaning, despite being told not to, and I couldn't find any. It was absolutely a show gloryfying and revelling in its own absurdity, and about absolutely nothing. That isn't to say it wasn't life-affirming, it was, and the third year students mixed their years of stylised training with Figs In Wigs' brand of performance superbly creating a totally unique piece of theatre.

One thing I seem to mention quite often though with this style of theatre is that it seems to neglect the vocal projection element of performance, preferring the actors to speak in their own timbres and only use amplification when using a microphone. Sadly though I still feel that the performers would benefit greatly from more vocal projection and enunication / diction classes. Some of their unamplified speech this evening was too quiet and too indistinct. The only other comment I would make is to the lighting designer / operator. For much of the performance I and many others in the audience were bathed in a UV light which was both distracting and unnecessary.

A highly engaging, hugely entertaining, intelligently acted, and cleverly devised piece of 'nothing' with 'absolutely no meaning whatsoever'. Bravo!