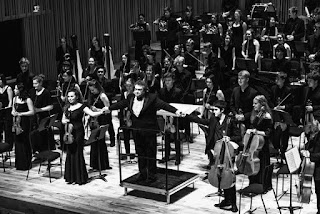 I wonder what it is like to close your eyes and listen to a piece of music you have never heard before, being played by an augmented professional adult symphony orchestra, only to open your eyes to find that that sound was being produced by teenagers. I wonder no more. It is an incredible and mightily impressive feeling. These youths (maximum 18 years) are phenomenal and this evening they were playing better than ever.

Three substantial concert works were performed this evening, all conducted by ex-alumnus Paul Mann. His conducting was precise, energetic, demanding, physical, and as both a musician and audience member easy and interesting to follow. Moreover the orchestra responded well to his baton-weilding, and the cumulative sound this evening was lush and harmonic.

The 'piece of music never heard before' was the opening piece this evening. Paul Hindemith's Symphonic Metamorphosis of Themes by Weber (1943).  This piece which lasts just over 20 minutes in 4 movements, is, as the programme notes so rightly suggest, probably far more Weber than Hindemith, but the Hindemith stamp is nevertheless omnipresent: the use of a large orchestra, sharp dynamic changes especially in volume, the ovetly 20th century twist on the Romantic style of composition adding dissonance, odd tonality or time signatures and other devices here and there - and particularly here in the first movement it felt very William Walton-esque at times. The music is rich and colourful, beautifully evocative and intense. Sometimes so simple and yet so effective, other times being extremely clever, but the cleverness is superbly calculated, still remaining tuneful and thematic. The piece was quite cinematic in feel throughout.  Some passages are reminiscent of the Classical style, others more Romantic, but all wrapped-up in the 20th Century compositional ethic. I enjoyed the second movement for its clever minimalism. I am absolutely no fan of the music of Philip Glass et al; however here the second movement consisted almost entirely of one single simple phrase which was continually repeated and modulated, and worked really well. I had heard of Paul Hindemith as a composer but was not familiar with his oeuvre. This has inspired me to find and listen to more.

Following this was a work with which I am extremely familiar. being a huge Tchaikovsky fan, and this work being a favourite of many a concert recital, it is a very often-played and well-liked piece. It is also Tchaikovsky's only violin concerto. Saying that however, one mustn't trivialise the work; it is a work of incredible depth and texture, and the solo violin part is absolutely no stroll in the park! And after the now smaller orchestra had reconfigured and the 16 year old soloist, and Chetham's pupil, Yixuan Ren took to the stage, we heard what must surely be one of - if not the most - instantly recognisable opening phrases in the violin repertoire; Ren handling this tricky and very long first movement with skill and precision, having remarkable technique and nimbleness. The andante second movement always reminds me of a Yiddish folk song - rightly or wrongly - and the exuberant and non-stop third movement brings the whole to a climatic and joyous finale. The violin solo is an incredibly difficult one, and even professional violists have famously passed this work by. All the more credit to Ren, whose interpretation was intelligent, mature and sensitive as well as technically superb.

The final piece of the evening was the concert's title piece, Igor Stravinsky's 'Petrushka'. Written in four distinct tableaux (or movements if you prefer) in Switzerland, and made into a ballet at the suggestion of Sergei Diaghilev (1911). I was extremely interested and rather curious to hear this work this evening as I have only ever once before heard this music live, and that was as the background music to the ballet. Watching a ballet the focus is on the dancers and their storytelling, and the music is somehow less important. Without the dancing however, one is forced to listen far more intently to the music as I did thsi evening, and what I heard was surprising and delightful. Again an augmented otchestra was required for this work including celeste, piano, 2 harps and a large percussion section. Dynamically extremely difficult but handled with aplomb, this work has a lot to say in those little moments between the sound, the pauses. It was lovely to hear these tiny moments of silence and then to listen to an unusual pairing of instruments to start a little duet before the main orchestra enters once again. Interesting rhythms, different styles and unusual harmonies litter his music. There is so much happening in the composer's mind, it is almost as if he is running out of time to write it all down on the page before he forgets it. I loved the beautiful extended diminuendo denouement, and the unexpected almost inaudible final notes.

A wonderful concert, hugely enjoyable, and unbelievably impressive to see and hear what those still in training are capable of. Magnificent. A triumph!