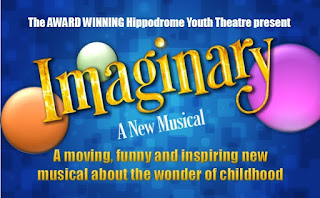 First presented two year's ago by The National Youth Music Theatre at The Other Palace in London, The Hippodrome Youth Theatre in Todmorden are the first company to produce this show in the north of England, and it is an acheivement of which they should be extremely proud

In a nutshell, the Musical tells the story of a young 11 year old schoolboy who plays with his imaginary friend. It is the last day of the school holiday and the following morning he has his first day at a new school and is told that he is now too old for an imaginary friend. However, things at this school aren't all what they appear to be and pupils are continually being 'upgraded' by a rather evil-looking headmaster hell-bent on making his pupils succeed and attain better grades. He has invented a machine which 'removes' the childs' imaginations and allows them to become much more automaton-like and as such they just absorb information without question. He enlists the help of the only other pupil with enough prescience and intelligence to be able to help him and together they try to destroy the machine and return the imaginations back to all the other pupils. It is not just his, but the headmaster's imaginary friends though who finally do manage to overcome his evil, and destroy the machine, proving beyond all doubt that the power of and need for imagination is paramount, not just in children but adults too! It's a great story, and was told this evening with real intelligence and power.

Add to this some delightful and catchy music, fitting perfectly with the narrative with memorable and toe-tapping rhythms, and you have the basis for a hugely enjoyable show indeed. All the show needs now is a cast and a director! Enter The Hippodrome Youth Theatre...

A cast of 66 (yes I'll write that again... 66!) all took to the Hippodrome stage and every single one was giving 100% all the time. The amount of energy, cohesion, precision and enjoyment on the stage was palpable and this helped each other and the flowing of the narrative enormously. The stage techniques, knowledge and prescence from all was noteworthy, and I was very impressed by the way the older, more experienced members of the company offered on-stage support and encouragement to those who were younger and less knowledgable.

I was very impressed by the overall standard of the performance and found the whole to be a truly engaging and delightful spectacle. Obviously with a cast of 66 it is quite impossible to mention all by name, however as the three protagonists of the show, Sam ( Joseph Willis), his Imaginary Friend, Milo (Katy Atkinson), and his adventurous school-friend Alice (Abigail Leach) were all extremely good and worked with each other superbly. Willis had a lovely treble voice, and I would imagine he is also a church chorister too. Special mentions also should be made to the PE Teacher who lost his voice, Mr. Grunt (Finn Maden) who showed excellent skill as a dancer / gymnast, as well as proving he could also speak and sing at the end of the show, and provided much of the comedy in his scenes; to the Imaginary Friend Oogle (Rebecca Spooner) whose important and plot-developing part comes in only in the middle of the second act, but she gave a lovely Munchkin-esque portrayal with good stage presence. However, for me the funniest, and most memorable character of the show is without doubt Big Brenda, played this evening with brusque tongue-in-cheek bravado by Ellie Spencer.

Directed with sensitivity and imagination by Martin Cook, excellent sounding music from a  proficient live band from musical director Helen Clarkson, and wonderfully suitable and age- and ability- appropriate choreography from Alexandra Townsend and Lisa Parker, this was nothing short of an absolute hit! And to top it all, the company had built themselves an excellent set - remiscent in some ways of Matilda - but it was both functional and, yes you've go it, imaginary!

If I had to be in any way nagative, then during one of the songs / sequences during a school lesson, there were a couple of microphones which were not working. A very minor detail, and one which can easily be rectified for future performances. Otherwise, this was indeed a most enjoyable and entertaining Musical (which should be more well known than it obviously is!), performed by a talented, committed and enthusiastic cast deserving of the highest of praise! I am already looking forward to coming next year!