NEWS: No Miracles Here - A New Musical sets off on UK tour! 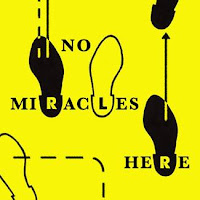 A dance marathon in a northern town forms the backdrop for a foot-stomping and thought-provoking new musical that promises to have audiences on their feet across the UK.

No Miracles Here is set to embark on a 15-date national tour in spring 2019, opening at Northern Stage in Newcastle on February 15. The show stops off at The Arts Centre in Ormskirk on 25-26 February.

The Letter Room presents a sweat-soaked marathon with a northern soul – a tale of resilience, strength and the need to stay on your feet.

Ray is young man with a big night ahead of him. The music has started, and he can’t leave the floor. He just has to keep going.

Follow the journey of Ray and his band The Raylettes in what is an uplifting and joyful look at how you can overcome depression through dancing.

Packed with live music and dance, No Miracles Here is an anthem to feeling alive and keeping the faith.

The raw and vibrant musical production was made in association with the charity Mind, and developed through support from the RSC, Northern Stage, Shoreditch Town Hall and The New Wolsey Theatre. It is brought to the stage on this new tour by producer Max Emmerson.

Stan Hodgson, co-artistic director of The Letter Room, said: “We’re delighted to be performing No Miracles Here, our music-filled story of resilience and hope set in a dance marathon.

“The show had a wonderful reception when it was initially staged in Edinburgh, Salford and London. We tried to tell a personal story of human struggle, but fill it with music, movement and humour.  And we can't wait to pick up our instruments, get our sweatbands on and bring it to new audiences across the country in 2019!"

What reviewers have said about No Miracles Here

“This truly original show is at once a moving, original exploration of mental health issues and an electrifying blend of live music and dance" – British Theatre Guide

“Unusual and engaging” – The Stage